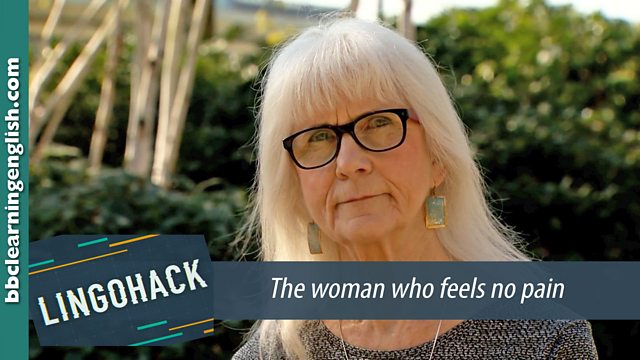 response to pain – physical, mental or chemical reaction that happens when feeling pain

chronic pain – pain which continues over a long time

What other effects do Jo's unusual genetic mutations bring?

She's had her teeth knocked out, broken her arm, suffered serious burns, yet Jo Cameron didn't feel any of it. The 71-year-old retired lecturer has a complete lack of pain sensitivity.

Jo Cameron
I put my arm on something and only realise it's burning when I can smell flesh burning - so it's not clumsiness. The normal reaction is you cut yourself or burn yourself once, maybe twice, then you avoid that because your brain says 'don't do that'. Well, my brain doesn't say 'don't do that'.

This is Joe with her husband and doctor eating super-hot chillies - a breeze for her.

Scientists have analysed her genes and found she has two DNA mutations. One seems to silence the response to pain and boost mood receptors in the brain. It is hoped the discovery could help others.

Professor John Wood, University College London
What we found is actually a new genetic mechanism that seems to be able to regulate pain thresholds and what we hope to do in the future is exploit this knowledge to perhaps develop new treatments for the millions of people that suffer ongoing chronic pain.

Jo Cameron
I can't stop being happy and I do forget things.

Jo's unusual gene mutations also boost her spirits and she's never felt anxious, but it also affects memory. She has always been forgetful, but it's her inability to feel pain which most fascinates scientists and may ultimately help others.

Did you get it?
What other effects do Jo's unusual genetic mutations bring?

Her genetic mutations boost her spirits, stop her feeling anxious but also affect her memory.