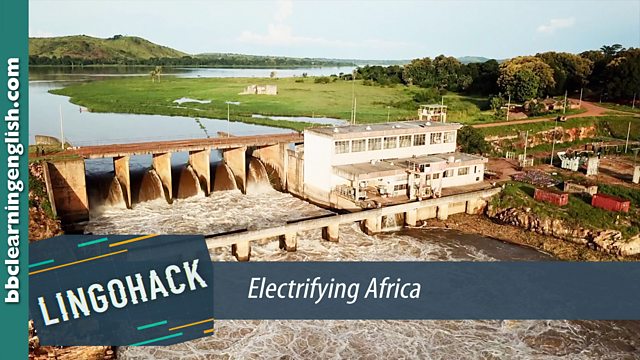 sustainability – not damaging the environment, allowing it to continue as long as possible

surplus – amount that is more than needed

small-scale – limited in size and output

Answer this…
What does an electric vehicle in the savannah help people see?

Sneaking up on a rare black rhino has never been easier. An electric car can negotiate the savannah in silence. But improving the chances of seeing the 'Big Five' is just the beginning for the Swedish start-up company that's set its sights much wider.

Filip Gardler, Opibus co-founder
Safari vehicles was a perfect entry market, more or less, to enter. They had the need of the tourists visiting having high requirements on sustainability.

Filip Lovstrom, Opibus co-founder
All across the world, we have 1.1 billion vehicles, so why should we replace all of those with the new electric cars when we instead, can convert them?

But these are the big prize. Converting Nairobi's Matatu mass-transport minibuses to electric would have a huge impact… and there's currently a surplus of electricity here.

But a huge number of Kenyans are not on the national grid and so are turning to small-scale solutions.

Leah pays a dollar a day for her solar system and can now charge her phone, her torch and watch TV. And having a light at night means Samuel can do his homework.

That's what Ethiopia's trying to do by building this vast dam across the Blue Nile.

And the waters of the Congo River could power Africa. There are multi-billion dollar plans to extend this Inga project, but miles from any industry it will need to build power lines too.

Erik Granskog, renewable energy consultant
So, the future of power in Africa is going to be a patchwork, between residential solar, distributed generation, mini-grids and there will be large hydroelectric dams.

Small and silent steps could be the best way to electrify Africa. And like mobile phone technology, leapfrog the need for vast power grids spanning the continent.

What does an electric vehicle in the savannah help people see?