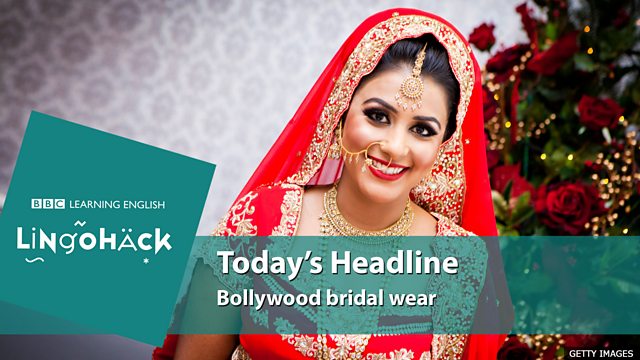 in demand – wanted by a lot of people

couture – clothes for individual customers made by fashionable designers

off-the-rack – (of clothes) ready-made; not bespoke

glamour – beauty that makes a thing attractive, exciting or fashionable

How have Indian designers closed the gap for many who want a duplicate or replica?

Luxury Indian bridal wear has never been more in demand.

Thousands of British Asians filled a swanky Mayfair hotel to meet the men and women behind the designs, and to discuss the possibility of wearing something similar to the stars.

Sabyasachi Mukherjee, fashion designer
The last four months or five months has been real chaotic because, you know, we did Deepika Padukone’s wedding, and after that came Priyanka Chopra and Nick Jonas’s wedding. Bollywood and fashion has worked together many, many times to create fashion awareness. A lot of people at the grassroot(s) level of benefit from it. Artisans, a lot of weavers, a lot of embroiderers, beaders, get a lot of job(s) done and I think that's exciting.

Aashni Shah Doshi, event organiser, Aashni + Co Wedding Show
I know people keep talking about Brexit. I haven't seen any down fall in people's spending for couture at all. A lot of the Indian designers have closed the gap for someone who wants to buy a duplicate or a replica as opposed to theirs because they have gone down on their pricing.

But it's not just affordability that's changed. It's also an increase in access; whether that be in person or on the internet.

Anita Dongre, fashion designer
The moment a celebrity wears you, within minutes, everyone gets to know – and I mean within minutes, we get requests on our Instagram, requests on the email. I think it's amazing that social media today connects you to the consumer directly with no time lost at all.

The brides-to-be spent a fortune at the show with designers tailoring hundreds of off-the-rack pieces for British Asians wanting that extra bit of glamour for their big day.

Did you get it?
How have Indian designers closed the gap for many who want a duplicate or replica?

Indian designers have gone down on their pricing.

Did you know?
The name 'Bollywood' is a portmanteau of 'Bombay', a city in India, and 'Hollywood', where most American movies are made.