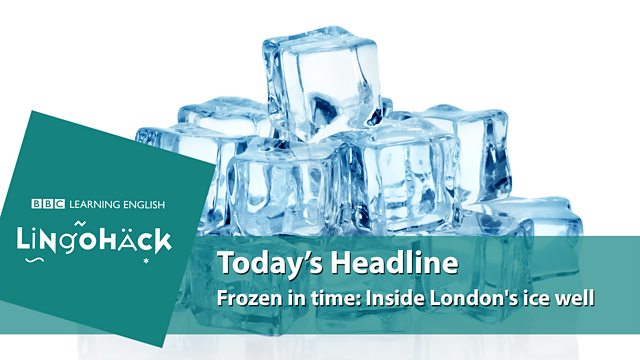 supplying – providing something to someone who wants or needs it

sourced locally – obtained from somewhere not far away

imported – brought goods from another country

distributed – sent to people who had bought it

commercial – for the purposes of business

Where did William Leftwich import his ice from?

Hidden, buried beneath the bustling streets of London, this ice well, was once one of the largest of its kind - storing and supplying ice to the whole capital.

David Sorapure, Museum of London Archaeology
It was built in the 1780s. Originally, the ice well was used to store ice sourced locally and that would have come from rivers and canals and it was pretty disgusting. There was whatever you can imagine that was floating in a river or canal could have easily ended up in this ice house. But in the 1820s, William Leftwich took over the ice well. He imported his ice from Norway and it was much better quality ice.

And it became big business here in the capital.

After being transported up the Regent's Canal, the large chunks of ice would have been brought into this egg-shaped well, 9.5 metres deep and 7.5 metres wide. When it was ready, it would've been taken to the top and distributed across London.

Grant Lipton, Director of Great Marlborough Estates
It was sold off to the local landowners, who wanted to come and buy a bit of ice, before the days of refrigerators as we know them. And the local landowners would buy it, or it was used for medical use, and people would come along and just buy a small portion.

And that wasn't its only use. It was also sold to butchers, fishmongers, restaurants, and for people entertaining.

David Sorapure, Museum of London Archaeology
What we recognise today as a sorbet –they were very popular. It was a way of entertaining your guests with something that was previously only really affordable by the aristocracy. But now, because of the large commercial ice well, that more people are able to access that little luxury.

It managed to survive the Blitz and was rediscovered during recent developments.

It's hoped that it will be open to the public via a new viewing corridor by next year. But in the meantime, this unique historical site contains only echoes of the past.

Where did William Leftwich import his ice from?

He imported his ice from Norway because it was much better quality.

The world-famous ICEHOTEL in Sweden is a hotel made from ice from the nearby frozen Torne River. In the summer the hotel melts and the water returns to its source.