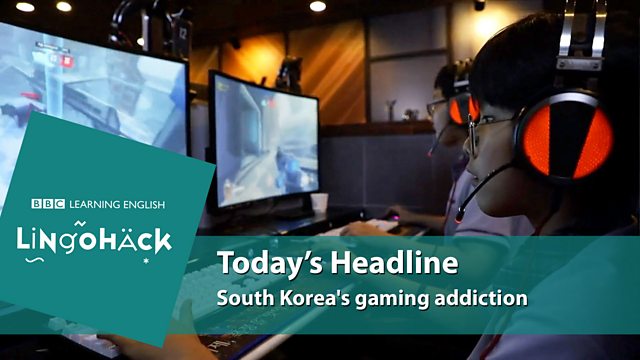 digital detox – period of time away from all digital devices

symptoms – signs and problems resulting from an illness or condition

How much is the South Korean gaming industry worth?

In South Korea many kids don't want to be sports stars, they want to be professional gamers. They practise for hours in rooms known as PC Bangs.  The competition is so tough, there's no time to stop for dinner.

In this arena, you're a fighter, a hero, a winner.  But it's having a real impact on this new gaming generation.

These teenagers are just a few of the hundreds who've had to undergo a digital detox treatment. Their passion was becoming an addiction.

I tried quitting by myself, but my friends kept seducing me back to the PC Bang.

They're taught to care for others and taken to a retirement home where they even put on a show. The aim is to help them interact in the real world: develop a human connection before their symptoms become much worse.

But one head teacher believes the answer is not to limit gaming, but to encourage it.

Everyone looks at this as a gaming problem. But if you look beyond that, all the kids have talent. And if you just hone that and make them concentrate on it, I think the kids show signs of genius.

The South Korean paradox is that its gaming industry is one of the biggest in the world worth over five billion dollars and it’s growing fast. But this country's also having to invest billions to ensure it doesn't lose a generation along the way.

Did you get it?
How much is the South Korean gaming industry worth?

The South Korean gaming industry is worth over five billion dollars.

Did you know?
Tennis for Two is widely considered to be the oldest video game. It was created in 1958 by American physicist William Higinbotham and looked much like the later and more well-known game Pong.