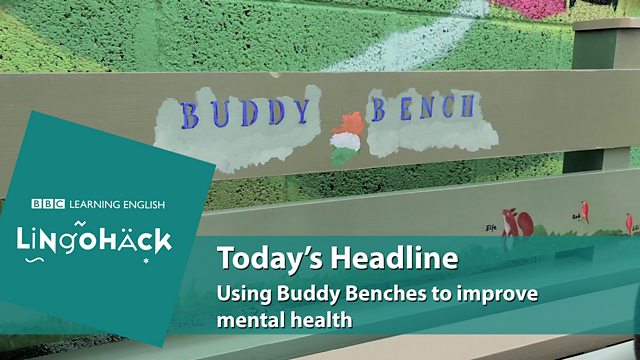 express feelings – tell someone else about your emotions

stigma – the feeling of a group that something is disgraceful, embarrassing or wrong

How many children have actually used the Buddy Bench?

This is what’s known as a 'Buddy' or 'Friendship Bench'. They’re needed because playgrounds can be lonely places sometimes. And these benches can help pupils feeling lonely to find a friend.

Benches like this have been around for a while now in many schools. But in Ireland, they are trying to do something a bit different with them. This school in Cork in the south of Ireland is the 247th to get one from a social enterprise called Buddy Bench Ireland that doesn't just provide schools with benches, it also runs special workshops with trained child psychiatrists.

They use the bench as an opportunity to start conversations about mental well-being. They talk about the importance of being aware of your feelings and those of others.

Judith Ashton, co-founder, Buddy Bench Ireland
The children need to understand what the bench is about, what it symbolises – friendship, inclusion, listening to each other and the most important thing, that it’s important to express feelings.

But do children actually use the bench? It's something an independent academic study has been looking at.

Sinead Mcgilloway, Maynooth University
We found that 40% of the children told us that they had actually used the benches at the time of the study. And over 90% said that they would talk to a child if that child was sitting on the bench. So, certainly there doesn't appear to be any issues around stigma.

Children's mental health at school is increasingly a concern in many countries. In Ireland, they're hoping these benches will not only tackle issues like social isolation and bullying, but also give a future generation the confidence to open up about their feelings.

Did you get it?
How many children have actually used the Buddy Bench?

At the time of the study, 40% of the children said they had used the bench.

Did you know?
Dozens of schools in England are giving students lessons in mindfulness to improve behaviour and health. This is a way to teach them to stop, be in the moment, be aware of their surroundings and relax.