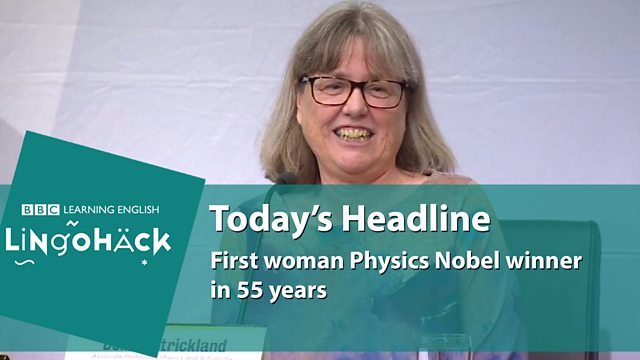 devised – created after thinking carefully about

to get recognised – to be formally acknowledged for an achievement

in the field – (here) in a particular area of research

The 2018 Nobel Prize in Physics … The ultimate scientific accolade. And Professor Donna Strickland is only the third woman ever to have won a Nobel Prize in Physics. She and her fellow winners were honoured for what the Nobel Committee called ground-breaking inventions in laser physics. Professor Strickland devised a way to use lasers as very precise drilling or cutting tools. Millions of eye operations are performed every year with these sharpest of laser beams.

How surprising do you think it is that you're the third woman to win this prize?

Well that is surprising, isn't it? I think that's the story that people want to talk about - that why it should take 60 years. There are so many women out there doing fantastic research, so why does it take so long to get recognised.

Physics still has one of the largest gender gaps in science. One recent study concluded that at the current rates it would be more than two centuries until there were equal numbers of senior male and female researchers in the field.

The last woman to win a Physics Nobel was German-born Maria Goeppert-Mayer in 1963 for her discoveries about the nuclei of atoms. Before that it was Marie Curie, who shared the 1903 prize with her husband, Pierre. This year's winners hope that breaking this half century hiatus will mean the focus in future will be on the research, rather than the gender of the researcher.

Professor Strickland's research is in laser physics: it's useful in eye operations.

Did you know?
The Nobel Prize was created by Alfred Nobel (1833-1893), a Swedish chemist and the inventor of dynamite. He used the bulk of his huge fortune to establish annual Prizes in Physics, Chemistry, Physiology or Medicine, Literature and Peace. An Economics Prize was added later.