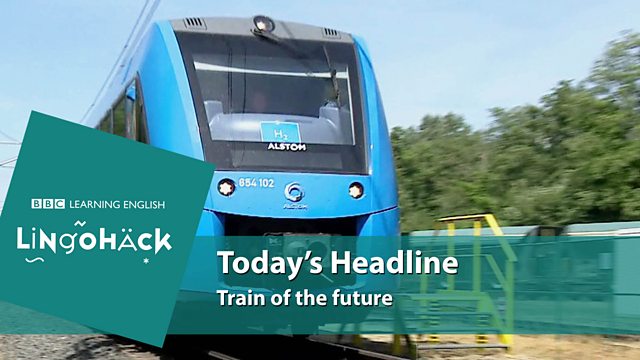 hydrogen – chemical element that has no colour, taste or smell. It combines with oxygen to form water

battery-powered – receiving power from a portable device that produces electricity

How far can this train travel on a 15-minute fill-up of hydrogen?

It looks like the sort of standard diesel train you'd find on commuter lines and in rural areas that rail electrification hasn't reached.

But here in Germany, they’ve developed one of the world's first trains to run on hydrogen fuel cells.

This is how it works. Hydrogen from an on-board tank goes to a fuel cell. That takes in oxygen from the air. And it creates a chemical reaction to make power.

The first trains ran on coal, of course. That was filthy. Diesels still emit gases that harm people and heat the climate, unlike ultra-clean hydrogen.

This is the emission from the exhaust. You can't smell it. I'm told you can't taste it. That's because it's water, pure water.

Battery-powered trains have been trialled in the UK and elsewhere as a substitute for overhead power lines. So what's the advantage for hydrogen?

Mike Muldoon, Alstom Engineering
We are using hydrogen because it gives us a better range for the train during the day than a battery would. Batteries take longer to charge and give us less energy through the day. So we would have to recharge them several times to provide the range that we can get with hydrogen.

One 15-minute hydrogen fill-up drives the train for more than 600 miles. What’s more, hydrogen can be produced by surplus wind power.

Hydrogen trains made here in Germany will go straight into service. The makers expect good business as governments round the world accept the need to cut emissions to protect the climate.

Shanghai Maglev is the fastest train in the world - with a maximum operating speed of 267.8 mph (431 km/h). Maglev is an abbreviation of 'magnetic levitation' – a system where trains run on a magnetic track rather than conventional rails.