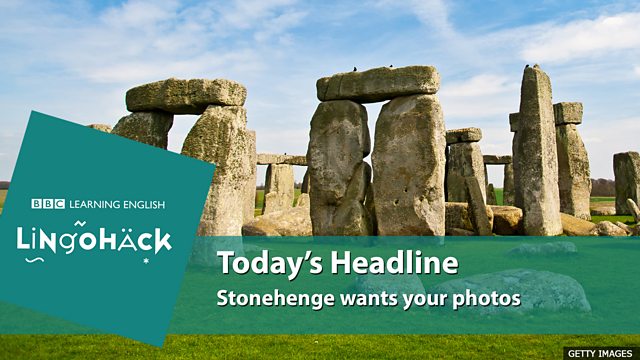 vividly – in a way that produces clear images in your mind

nostalgia – feeling of longing for something in the past

personalise – create associations with feelings rather than abstract ideas

He's got one. She's getting hers. She's not leaving without one - photographs, millions of them, taken of this extraordinary monument.

And now, this monument wants yours.

Sue Lane was just four when she walked among the stones in 1966 and also came back to the same place, whilst Jane Vellender was a little girl in the late 1960s, on a visit from Bristol. And today she came back in person as well, to the very same stone: all to join a new project sharing personal memories of Stonehenge, 100 years after the site was gifted to the nation.

I was about five and I vividly remember coming here and being wowed by how big the stones were and how old, even though I was only little.

The project wants any photo, from anyone, from anywhere at Stonehenge. It's to tell the story of the past 100 years by the people who have been here. This is Neolithic nostalgia.

Stonehenge has about one and a half million tourists a year - and everybody takes a photograph. With this new project, it doesn't matter how old the photograph is, or whether the picture's black and white or colour. The aim remains the same: to personalise this ancient monument.

Hundreds of photos have been uploaded, each one placed at the spot they were taken.

We want to make sure that there is an opportunity for people to share those special memories, and those stories of Stonehenge's most recent history, so a digital photo album is a great way to create almost a national photo album of Stonehenge.

Stonehenge was gifted to the nation 100 years ago.

Did you know?
According to English Heritage, Stonehenge was built in stages: the first monument was an early henge monument, built about 5,000 years ago, and the unique stone circle was erected in the late Neolithic period around 2500 BC.