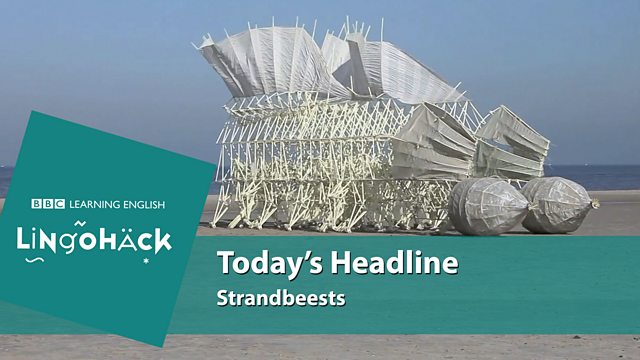 engineer – someone who designs or builds things such as machines

powered by – given energy by

Scheveningen on the Dutch coast and a summer spectacle, the Strandbeests. Windblown mechanical artworks.

Theo Jansen, artist
My name is Theo Jansen, and I try to make new forms of life on the beach where I was born 70 years ago.

Theo Jansen is an engineer and artist, and we joined him as he brought out his latest beasts for his summer experiments.

Theo Jansen, artist
These animals, they give me sleepless nights, because I'm thinking it is really addiction, you could say.

The puzzle: how to make something move and survive on the beach, powered only by the wind.

What you are looking at is 28 years of trial and error. Expertise at creating mechanical movement - almost a mechanical brain, which is what has attracted the attention of Nasa.

This animation shows how their meeting with Theo has influenced their thinking for a Venus rover - an environment where pressure and heat is just too much for normal motors. However, he had doubts that legs could cope with the rocky surfaces, so he showed them this: his caterpillar, inspiration for a more robust design.

Nasa is still working on a final design, but whatever they come up with, it will owe something to Theo's strange, beautiful windborne creatures.

On Venus, the pressure and heat are too much for normal motors.