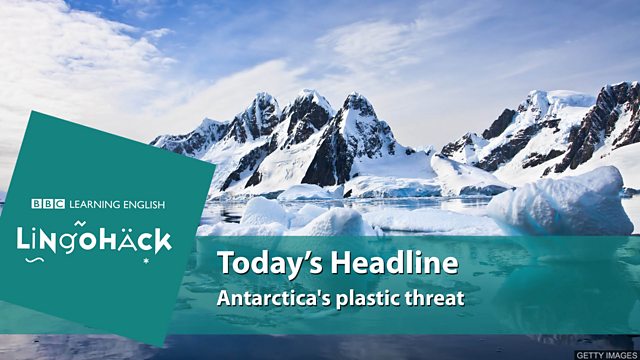 pristine - clean; in a good condition

airborne - carried in the air

Scientists use a 'manta' to collect samples. What is it?

This is the most remote continent on Earth. It looks pristine, but today there's new evidence that microplastics are now reaching even these waters. And perhaps more disturbingly there is also pollution from airborne chemicals in freshly fallen snow.

We were with scientists on board a Greenpeace ship in January as they began testing waters off the Antarctic Peninsula. Very little data exists. It's a question of picking a tiny bit of the Southern Ocean and lowering in a manta, a trawling device. Any microplastics should find their way into the net.

The team searched some of the most isolated places on the planet. They also hunted for pollution on land, gathering samples of freshly fallen snow. We didn't know it at the time, but even here, deposited either as a gas or in dust, were molecules of man-made chemicals.

The samples of the three-month-long expedition were brought to this laboratory in Exeter; the majority were found to be contaminated.

Dr David Santillo, Exeter University
What we're finding is that in almost all of the samples of water we collected, we find tiny pieces of microplastics. Maybe only a few fragments of fibres in every litre of water, but given that this is really the end of the Earth, it's remarkable once again that we are finding microplastics almost wherever we look.

This will only add to the growing calls for something to be done about plastic before more of it reaches the end of the Earth.