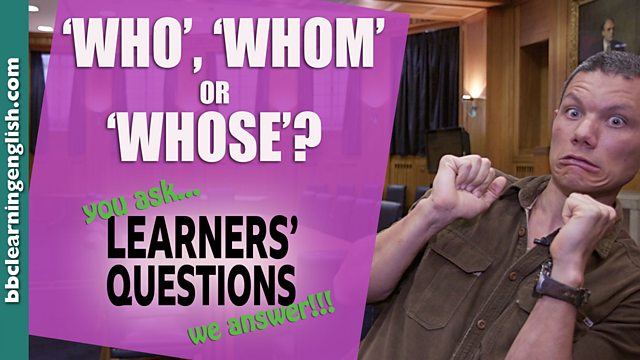 What’s the difference between ‘who’, ‘whom’ and ‘whose’? - Rodolfo from Brazil

Who, whom and whose are interrogative pronouns.

Who asks about a person and works as a subject or an object.

Whom asks about a person but only when it is an object - it's an object pronoun. It's quite formal and it's used more in writing. When you write to a company but you don't know to which person to send it to, you write at the top: To Whom It May Concern.

Whom is often used with a preposition (very formal):

Whose is a question word and is used to ask about possession. It functions like 'my', 'his' 'her' etc and it must be followed by a noun.

Who and whom are relative pronouns that represent a person within a relative clause.

Who is a personal pronoun in a relative clause and can be used as the subject or object.

Whom is the object form of who. It represents a person that is the object of the relative clause. Whom is mostly formal and mostly used in a written style.

Whose is used to talk about possessions. It's a prossessive relative pronoun and it must be followed by a noun.

"The student whose dog has run away, has gone to look for it."