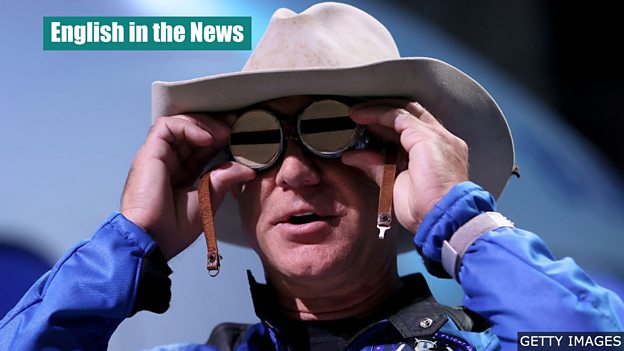 Jeff Bezos was aboard the first crewed flight of his rocket ship, New Shepard, as it launched into space.

aboard – on a ship or craft

crewed – describes flight with people on it

accompanied – with other people

pioneer – person among the first to do something or go somewhere

lifted off – left the Earth

touching down – returning to the Earth

joy rides – pleasure trips with no purpose other than enjoyment

sub-orbital – less than one complete orbit of the Earth

boundary – edge of something

somersaults – rolling movements in which the body turns over

weightlessness – state in which gravity doesn’t affect something

1. How many people were on the flight?

2. What was unique about the windows of the craft?

3. How long did the flight last?

4. What do Jeff Bezos critics say the money for this project could be better spent on?

5. How far above the Earth is the Karmen line?

The capsule they were in has the biggest windows flown in space. This meant the four passengers had stunning views of the Earth.

The spacecraft lifted off at 14:12 (BST) and the flight lasted for ten minutes and ten seconds. Upon touching down, Jeff Bezos exclaimed: "Best day ever!"

What is New Shepard?
The spacecraft, New Shepard, was built by Bezos's company Blue Origin. It is designed for the space tourism industry.

Amazon founder Mr Bezos - and other people in the 'billionaire space race' - have been criticised for offering what some see as joy rides for the super-rich.

Critics say the money could be spent in other ways – for example, on pay rises for employees or fighting climate change.

What did Mr Bezos say?
Mr Bezos states that he has an environmental vision: "We need to take all heavy industry, all polluting industry and move it into space, and keep Earth as this beautiful gem of a planet that it is," he told MSNBC.

"It's going to take decades and decades to achieve, but you have to start, and big things start with small steps... that's what this sub-orbital tourism mission allows us to do, it allows us to practice over and over."

What happened during the flight?
Two minutes into the flight, the capsule separated from its rocket and continued towards the Karman Line. The Karmen line is the most widely recognised boundary of space - 100km up.

After the flight, a video was shown of the passengers doing somersaults and tumbles during four minutes of weightlessness. Also, stunning views of the Earth could be seen outside.

On the return to Earth, Jeff Bezos told mission control: "You have a very happy crew up here."

Find out more from the original BBC report

2. What was unique about the windows of the craft?
They are the biggest that have ever been into space.

4. What do Jeff Bezos critics say the money for this project could be better spent on?
They say the money could be spent on pay rises or fighting climate change.