Football racism: Messages of support to be saved 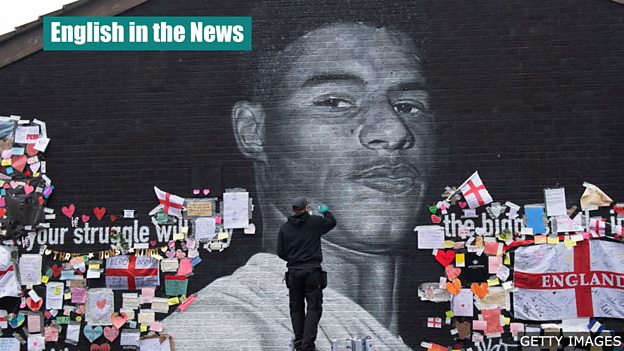 Messages of support and solidarity have been left on a mural of footballer Marcus Rashford. These messages will now be preserved.

solidarity – feeling of unity or agreement of an action

cover up – hide or stop from being seen

street artist – artist who paints on walls in the streets

portrait – picture of a person

commissioned – chose someone to do some artwork

retained – kept; continue to have something

recorded – document or evidence of something kept

tackle – deal with a problem

force – department of the police

tribute – something said or written which shows respect

gathered – grouped in once place

1. When was the mural damaged?

2. Where is the mural located?

4. Outside of football, what is Marcus Rashford known for?

5. What has Marcus Rashford said about that penalty miss?

Hundreds of supportive notes were placed on an image of Marcus Rashford which was defaced following England's Euro 2020 final defeat to Italy.

The wall art is located in Withington, Manchester, and the heartfelt messages were placed to cover up damage.

Akse, the street artist who created the portrait, has now repaired the damage. Ed Wellard, who commissioned the mural, stated that a final decision had yet to be made but the notes and messages would be "retained, recorded and if possible displayed".

What happened before the mural was damaged?

The artwork was defaced with several swear words shortly after Rashford missed a penalty in the 3-2 shootout loss to Italy on Sunday.

Marcus Rashord, Jadon Sancho and Bukayo Saka all missed their spot kicks in the final. The three players were also targeted with racist abuse on social media after the game.

Outside of football, he is known for his campaigns to tackle child hunger.

What have the police done?

Greater Manchester Police have launched an investigation. The force received a report of racially aggravated damage at the mural at 02:50 BST on Monday.

A social media post which was directed at the England players on Sunday is also being investigated.

A 37-year-old man, from Trafford, has since been arrested.

What has Marcus Rashford said?

Rashford said he was sorry for missing his penalty and that he "wished it had gone differently". He also paid tribute to those who added the supportive messages to the mural.

The Manchester United forward also said he was "lost for words" as hundreds of people gathered for an anti-racism demonstration at the mural on Tuesday evening.

People took the knee at the Stand Up to Racism demonstration and several speakers addressed a crowd of around 700 people.

Find out more from the original BBC report and read reaction here.

1. When was the mural damaged?
The mural was defaced following England's Euro 2020 final defeat to Italy, shortly after Marcus Rashford missed a penalty.

2. Where is the mural located?
The wall art is located in Withington, Manchester.

3. Who is Akse?
The street artist who painted the mural.

5. What has Marcus Rashford said about that penalty miss?
Rashford said he was sorry for missing his penalty and that he "wished it had gone differently".