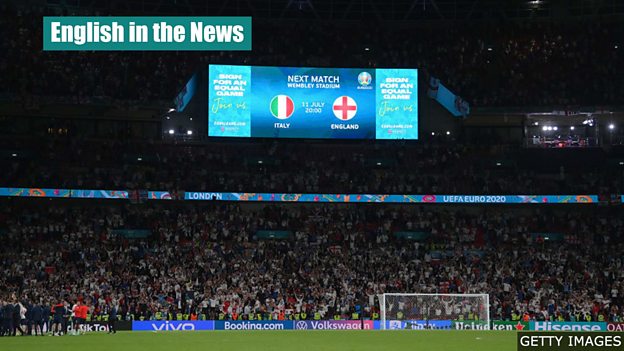 The England football team beat Denmark 2-1 in front of more than 50,000 ecstatic England fans at Wembley stadium to reach their first ever European Championship final.

victory – winning a game or competition

on the rise - improving

1. Where did the semi-final game take place?

3. Where did England fans celebrate after the game?

5. How successful were England when they last met Italy in a major tournament?

What has happened?
The England team, managed by Gareth Southgate, has successfully made its way through the Euro 2020 tournament to the semi-finals. In a tense game against Denmark on Wednesday, Captain Harry Kane hit the winner in extra time to book a place against Italy’s national team, the Azzurri, at Wembley stadium in London on Sunday.

Plenty was said about the controversial decision to award the penalty that led to England's winning goal, after Raheem Sterling had been fouled by Joakim Maehle. "Dubious penalty, I'm still not convinced, but who cares? We're in the final," added former England winger Chris Waddle on BBC Radio 5 Live.

How important is this?
The England players know victory against Italy will earn them a first major tournament triumph for 55 years. They last won the World Cup against West Germany in 1966.

What was the reaction?
The final whistle was greeted by scenes of jubilation and celebration in towns and cities across England. "I'm just so pleased for our country," said boss Southgate, who punched the air at the final whistle. "We know what our country like others has been through and to continue that happiness and journey for another four days, we're so happy."

How good are Italy?
Italy failed to qualify for the 2018 World Cup but they have been on the rise since former Manchester City boss Roberto Mancini took charge in 2018. They head into Sunday's final unbeaten in 33 matches and have been gathering momentum throughout Euro 2020 since their opening win against Turkey. The last time Italy and England met at a major tournament, Italy won 2-1 at the 2014 World Cup in Brazil. The Three Lions (England) finished bottom of their group..

Find out more from the original BBC Sport report and read reaction here.

1. Where did the semi-final game take place?
It took place at Wembley stadium in London.

2. When did Harry Kane score England’s winning goal?
He scored in extra-time.

3. Where did England fans celebrate after the game?
There were scenes of jubilation and celebration in towns and cities across England.

4. What has England not won for 55 years?
They have not won a major tournament.

5. How successful were England when they last met Italy in a major tournament?
Not very successful. Italy won 2-1 at the 2014 World Cup in Brazil, as England finished bottom of their group.