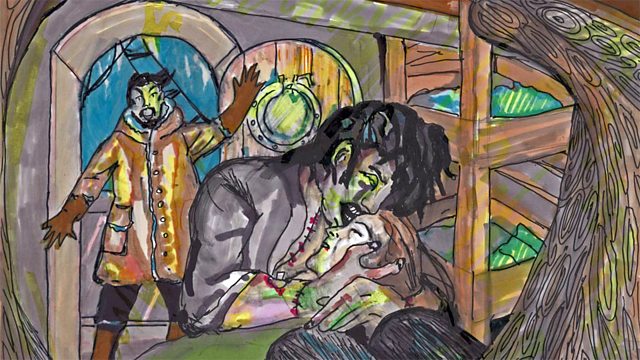 The final encounter...
Hatred and fear melt in the cold Arctic when the Creature finally sees its creator again.

TODAY - IN THE ARCTIC

CaptainHello I'm Captain Walton. Something unexpected happened on my way here to the Arctic. I still can't make sense of it. I and my crew found this poor man on the ice. He was half dead when we rescued him. He said his name was Viktor Frankenstein. He was a good man but a very sad one. He told us a very strange story about a monster he created. And this monster was responsible for many deaths. He said he wished to warn me about the dangers of science but I think what he wanted was to get that story off of his chest. We took care of him but unfortunately he died. Poor man. What a crazy story!

CrewmanCaptain, I have some good news.

CrewmanThere's a change in the wind. It's warmer. The ice is disappearing and we are going to be able to continue our trip to the North Pole.

CrewmanI thought you needed some cheering up. It's sad what happened to that poor man, Frankenstein, who died earlier, isn't it? We gave him blankets, hot soup, but he was already very weak.

CaptainYes. Yes, I know. What else could we have done?

CrewmanDo you think that story he told us is true? About the monster? I remember the big shadow we saw far away, in the middle of the ice, before we rescued Frankenstein.

CaptainYes, it was moving very quickly before it disappeared. But maybe it was something else. How can we be sure? All we've been able to see for weeks is this ice!

CrewmanYes. I guess so. Well sir, let me go back to preparing the ship to continue our journey.

CaptainWhat's... what's that? Someone's crying. The sound is coming from the cabin where Frankenstein's body is. Let me see what this is...

IN THE SHIP'S CABIN

CaptainYou must be the Creature! His story was true!

CreatureYes. He built me and brought me to life... to a very sad life. Now he's gone. I found him dead.

CaptainWell, at least... at least he's in peace now. He was carrying great pain in his heart. But why are you holding his body and crying? I thought you wanted to kill him?

CreatureI came to tell him I'm so very sorry.

CaptainSorry?! Is it true? Maybe you're crying because you can't hurt him anymore. You caused him so many problems! All those deaths...

CreatureAnd what good has it done? I wanted to be kind and have love and friendship. But all I got was hatred. People feared me, they attacked me. And I hated them and attacked them in return. Now I hate myself.

CaptainAnd so what are you going to do?

CreatureOnly death can end my suffering. I'll go north, build a fire and throw myself into the flames. Then it will be over.

CaptainBut are... are you sure? Does it have to be this way?

CreatureThat's the only way. My body will be blown to the sea by the wind and my spirit will finally be free. Goodbye, Frankenstein. Goodbye, sir. Don't follow me.

CaptainThere goes the Creature running fast across the ice. What a powerful being and how sorry he was! Oh, he's disappeared now... Poor creature. In the future we might know him as Frankenstein. That was the name of his creator. He, or... it, didn't even get a name. It's just called the Creature. A Creature which will never be seen again.

cheering up
making someone feel happier

Adapted and produced for BBC Learning English by Graciela Damiano

Will Harrison-Wallace (right in picture above): The Creature