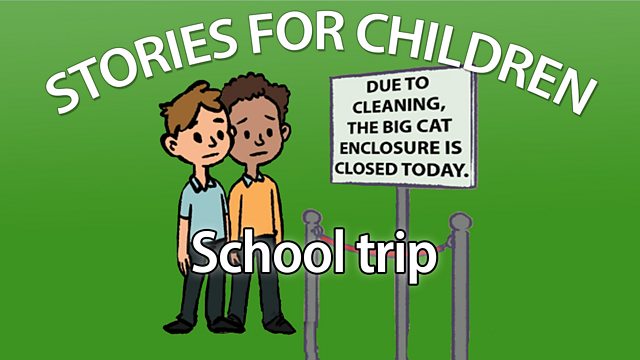 One day Joe's teacher had some news.

“We're going on a school trip,” she told the class. “As we've been learning about different animals, we are going to visit a wildlife park.”

That evening, Joe showed his parents the letter about the school trip.

“Wonderful,” said Mum. “We must make sure you have everything you need.”

“Will there really be lions?” asked Bella, her eyes big with excitement.

“Yes, and leopards too.”

“Ooh,” said Bella, and her eyes grew even bigger.

On the morning of the trip, Joe had everything ready.

“Quick,” he said at breakfast. “I can't be late. Or they might leave without me.”

Everyone looked at Bella. She had a packed lunch, a water bottle, a scarf and sunscreen. She thought she was going to the wildlife park too!

“But the trip is only for the big ones,” said Mum.

“I want to see the animals!” howled Bella.

Joe said nothing. Why did his sister always make a fuss, he wondered. Why did she always try to butt in?

His parents were trying to calm Bella.

“We'll take you to the wildlife park at the weekend.”

Joe lost his temper. “It's time you learned you can't have everything your way,” he told his sister. “I'm going on this trip, not you. If you go at
the weekend – fine – but I'm not coming with you!”

Nothing they said would make him change his mind.

When they got to the school, the coach was waiting. Joe sat next to Finn.

“I can't wait to see the rhinos,” said Finn.

The coach set off. It had only gone a little way down the motorway when it began to make a strange noise. It was banging and rattling. There was smoke coming from the back. The coach driver pulled to the side of the motorway. With a thud, the coach stopped!

The driver phoned the breakdown service. At first it was exciting, but after a while everyone began to get bored.

“This is no fun,” grumbled Finn.

Finally, the breakdown truck arrived. But it couldn't fix the coach. They waited and waited. At last, a new coach came. Everyone had to climb off the first coach and onto the second one.

They were all bored and hungry by now.

When they got to the wildlife park, it was very busy. There were lots of school groups already there. They had to wait in line at the gate. When they finally got in, it was lunchtime. Their teachers made them sit and eat their sandwiches before they could see the animals.

“At this rate, we won't see anything,” said Joe.

“I'm afraid we haven't very long,” said the teacher. “You must all be back at the coach in an hour.”

Joe had a horrible shock. There was a barrier with a sign. It said “Due to Cleaning, the Big Cat Enclosure is Closed Today.”

Joe was very quiet all the way back to school.

“How was the wildlife park?” asked Dad at tea. “Did you see lots of animals?”