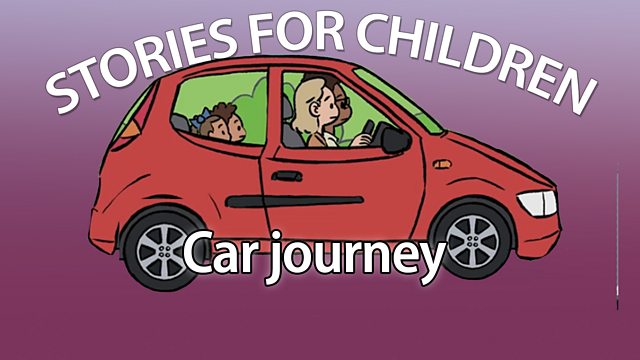 “Are we nearly there yet?” asked Bella, banging her feet against the back of Mum's seat.

Joe, who was sitting next to her, groaned. “That's the tenth time she's asked that. And there's still miles to go.”

The Hobson family were off to Scotland to visit Nana and Gramps. It was school holidays, and they were going to spend a whole week there.

They had crammed all their suitcases into the car and said goodbye to their friends and to Granny, who was going to look after their pets while they were away.

Now, Bella and Joe were sitting in the back seat. But Bella was bored.

“Why don't you have a nap, Bella?” suggested Dad.

“Why not watch another film on your tablet?”

Bella always enjoyed playing this game. Joe had to choose something that he could see, and everyone else had to guess what it was.

Joe looked around and saw some cows grazing in a field.

“I spy with my little eye, something beginning with C.”

“But I can't see any cows,” said Bella, looking around.

“Well, no,” Joe admitted. “We've gone past now. But there was a field of cows before.”

Bella wasn't pleased. So Joe let her have a turn. The trouble was, they soon ran out of things to “I spy”. There wasn't much to see, apart from fields and hedges, the road in front of them, and the traffic going past.

So it was a great relief when Dad suddenly said, “I spy coffee,” and Mum turned the car off the motorway and into a motorway service station.

Having a snack cheered everybody up. Then they put more petrol in the car. “It won't be long now,” said Mum as they set off. But as Dad drove towards the motorway, they got a terrible shock.

There were cars as far as the eye could see, and none of them was moving. It was a giant traffic jam.

“There must be roadworks,” said Mum.

Dad turned the car around. “We won't go on the motorway. We'll take the small roads instead.”

“We'll use our phones. They will show us the way!”

They drove into the hills. There were no more cars. There was no traffic at all. The trouble was, soon there was no phone reception either!

Bella fell asleep. The roads grew narrower and turned into country lanes. Eventually, they arrived at a crossroads.

“Now what?” said Mum. “Left or right or straight ahead?”

Mum and Dad started squabbling. Joe sat and wondered what they should do. He had no idea which way led to Scotland. The only good thing was that Bella was still asleep, so at least he didn't have to listen to her complaining, and asking how long it would be.

“Are we nearly there yet?”

Bella pointed out the window. “That way!” she said firmly.

Dad started the car and drove the way that Bella had pointed.

“She sounds very sure,” said Dad. “After all, we have to go somewhere!”

They hadn't travelled far when Mum gave a cry. “Look! A signpost! Bella was right!”

Joe had to laugh. It might have been a lucky guess, but still, if it weren't for Bella, they would still be arguing at the crossroads.

“Are we nearly there yet?” Bella asked.