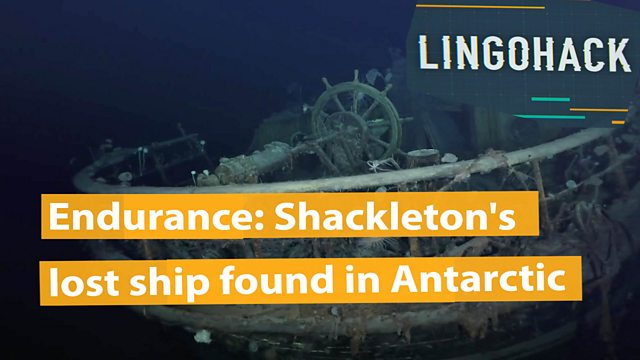 Endurance: Shackleton's lost ship is found in the Antarctic

preserved – kept in its original condition

construction – way something was built

portholes – round windows on the side of a ship

raised – brought to the surface of the sea

How far below the sea ice is the wreck of Endurance?

Emerging from the Antarctic deep – the world’s most famous undiscovered shipwreck – now found.

It’s the first time anyone has seen it in more than 100 years.

Endurance – perfectly preserved – frozen in time, 3,000 metres beneath the ice.

Mensun Bound, Director of Exploration, Endurance 22
I knew that this was probably either the first of second most strongly-built ice ship ever, and I was just in awe of her construction. And I thought if there was any wood-built ship that could survive the impact with the seabed, it would be the Endurance. And she did – she held together beautifully. But I’ve never ever seen a wreck anything like as beautiful and as inspiring as this one.

The condition of Sir Ernest Shackleton’s ship is astonishing. The ship’s wheel is almost pristine. The portholes look polished. And these white circles are dinner plates abandoned by the crew.

This was the polar icebreaker that brought the team to the wreck. The conditions were challenging. The Agulhas II had to carve its way through the thick ice in the Weddell Sea. Underwater robots were deployed and spent weeks searching the deep until the Endurance was at last found.

And this was the ship just before it sank. Captured on camera in footage that’s been restored and released by the BFI [British Film Institute]. The Endurance was in trouble from the start – becoming stuck in thick sea ice just weeks after setting off from South Georgia. It drifted for months before an order was eventually given for the crew to abandon the ship.

The ship won’t be raised and nothing will be removed. Left exactly as it was found, resting in the darkness of this most remote corner of the world.

How far below the sea ice is the wreck of Endurance?