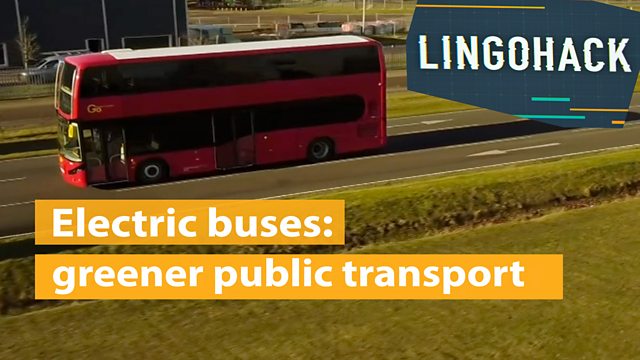 secreted – placed where it is difficult to see

range – distance something can travel without refuelling

In the long term, how many buses per year does the company wish to sell?

Richard Westcott – BBC Journalist
If we are going to clean up the air in our towns and cities, we have got to attract more people onto public transport. And that means getting rid of all those diesel buses chugging around. And that is where this new piece of technology comes in.

Designed by an ex-Formula One engineer and his team it looks like a normal double-decker.
But they say they found a way of boosting how far it can go on one charge.

Richard Westcott – BBC Journalist
It's got five batteries like this one secreted around the vehicle, but that's not the clever bit. The clever bit is at the back because apparently with electric buses they can use as much energy just heating and cooling the cabin as they do physically driving along. So, they have developed much more efficient air conditioning. And that means, overall, it’s got a much longer range.

Ian Foley used to work for the Williams and Lotus F, until he decided to turn his skills to a bit less racy.

So, some of that learning from your earlier career has helped you with this?

Ian Foley - Managing Director, Equipmake
Absolutely. And we've got quite a few of the guys who I worked with earlier on in my career here, kind of working on weight saving and a very efficient mechanical design.

The key technology has been designed at a factory near Norwich.

Long term, they want to make 200 vehicles a year to be sold all over the world, but still built locally.

Ian Foley - Managing Director, Equipmake
We've got the resources here. We have got the people here. Our batteries are made locally here. So, it's really important for us to make everything here in the UK. Ninety per cent of our product is actually made on this site.

Bus giant "Go Ahead" is trialling one on a London route.

So, the vehicle is going to be taking its first passengers later in the spring.

In the long term, how many buses per year does the company wish to sell?

It wants to sell 200 vehicles a year that will be sold all over the world.