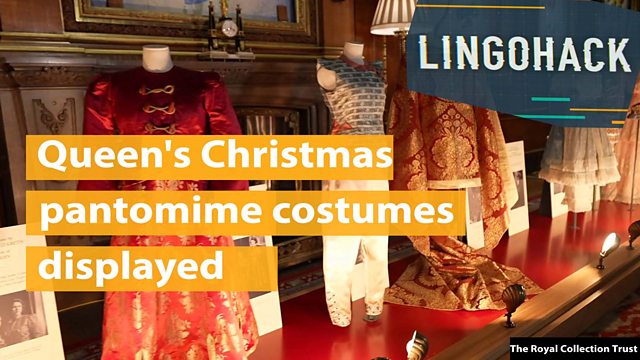 princesses – female members of a royal family, often daughters of a king or queen

on the throne – being the king or queen

monarch – a king or queen

Which room in Windsor Castle were the pantomimes staged in?

Its trees are decorated. Its grand state rooms dressed, and this year the castle is taking visitors back 80 years, to the days when a pair of teenage girls who lived here tried to lift spirits during the Christmases of the Second World War.

Princess Elizabeth, as she was then, and her sister Princess Margaret, created an annual royal pantomime.

For the first time some of their costumes have come out of the archive and are on display.

The two princesses were always the  star performers. The shows were staged in this room - the Waterloo Chamber. The audience was castle staff, the local school, troops and the King and Queen. Money from tickets sold was used to make blankets for soldiers on the front line.

Daniella Ralph, BBC reporter
I know they were here in the grand surroundings of Windsor Castle, but here there is something quite ordinary about putting on a show for your family and your friends.

Caroline de Guitaut, curator, Royal Collection Trust
Yes, ordinary up to a point. I mean, they were supported by sound technicians that came specially from the BBC, you know, special set designers, but that was very much blended with that kind of homemade element too. So, whilst the performances were, you know, looked very grand and very beautiful, there was very much a kind of homegrown spirit to it all.

The pantos also showed the strong sibling bond. Onstage in costume, Elizabeth and Margaret were a formidable partnership. And privately, these royal sisters were a vital support for one another.

They were often away from their parents - having moved out of London during the war.

As the Queen  heads into  her 70th year on the throne, the panto display is a reminder of Christmases here at the castle during a unique time in her life - before she had taken on the responsibilities of monarch.

It is a snapshot of a royal childhood  - of how Christmas at the castle, tried to bring some festive cheer to the dark days of war.

Which room in Windsor Castle were the pantomimes staged in?

The shows were staged in the Waterloo Chamber.