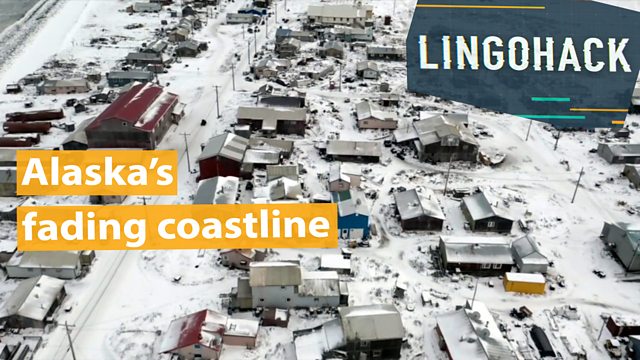 lifeline – something that people depend on to survive

let go of – leave a place you are emotionally attached to

face (verb) – deal with or accept a difficult situation

Where will the people on the island be moved to?

The top of our world is changing - warming twice as fast as the rest of the planet. And it is destroying communities.

Alfred Kiyutelluk
My house used to be about 20 feet [6 metres] out, where you see … the water breaks.

The island of Shishmaref [Alaskan town] is on the frontline of climate change. As temperatures rise, less sea ice forms, exposing the coast.

Alfred Kiyutelluk
It's getting later and later every year for this ocean to freeze up. It's tough but [we have] got to keep going.

As the climate changes, the animals and fish that people here used to live on are getting harder to find.

Howard Weyiouanna Sr, Shishmaref mayor
Right now, we’re supposed to be fishing in the lagoon and up the rivers. Now we’ve got to wait until, like, December or probably January to start going up again.

Parts of the main road have washed away, and now the air strip that is the community’s lifeline to the outside world is threatened.

The plan is to move the entire town onto the mainland. It will cost an estimated a hundred and eighty million dollars, but, says Dennis, they’ve got no choice.

Dennis Davis
The climate’s changing so fast. And the storms are getting more violent, and the ice isn’t forming, and the water’s warming. I mean, it’s… I would say, within the next five/ten years, this will all be covered - easy. Just that one or two degrees makes a big difference.

It isn't easy to let go of the place where you've spent your entire life. But if greenhouse gas emissions aren't cut rapidly, it is something many millions more people are likely to have to face.

Where will the people on the island be moved to?

The plan is to move the entire town onto the mainland.