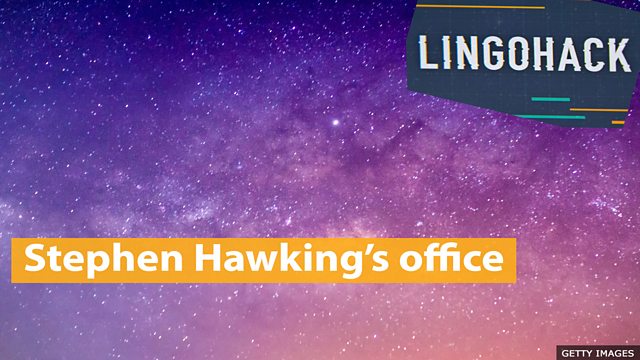 tenderness – kindness and the trait of being gentle

debilitate – make someone or something physically weaker

willing – desire to do something

determination – ability to do something, despite problems

He was the world's most inspiring scientist. His research, photographs and letters are his legacy to the world - and they are to be saved for the nation. His son Tim sees many of them for the first time - including a letter that his father wrote to his dad when he was just six.

Tim Hawking - Son
Dear Father - once upon a time some pirates were loading some treasure. I think it shows a sort of tenderness in his relationship with his father. You know, he had a very, sort of, loving relationship with his dad - as I did when I was the age he was when he wrote the letter.

Here he is as a student. Motor neurone disease went on to debilitate his body - but not his mind. This is his most important scientific paper on black holes - which have such strong gravity - that not even light can escape. His script from the Simpsons is also an important part of the collection.

Dr Jessica Gardner - University Librarian, University of Cambridge
He had an enormous sense of humour. That comes out through interviews that people have seen through that characterisation, willing to be in the Simpsons, to allow a little bit of fun be taken - if what that did was help to communicate about science.

Pallab Ghosh – BBC Reporter
The contents of Stephen Hawking's office will be transferred to the Science Museum in London. Most iconic of all is his wheelchair - a symbol of the physical challenges he faced, and also the strength and determination he had to overcome them.

The eventual aim is to reconstruct his entire office.

Sir Ian Blatchford - Director, Science Museum
There are very few scientific spaces that survive. So actually having Stephen's office is wonderful because he is extraordinary - but it sends a big, powerful message about the prestige of science as well.

Future generations will now be able to learn about the life and work of a man who inspired us with his brilliance, courage and humanity.

Where will Stephen Hawking’s office be moved to?

His office will be moved to the Science Museum in London.