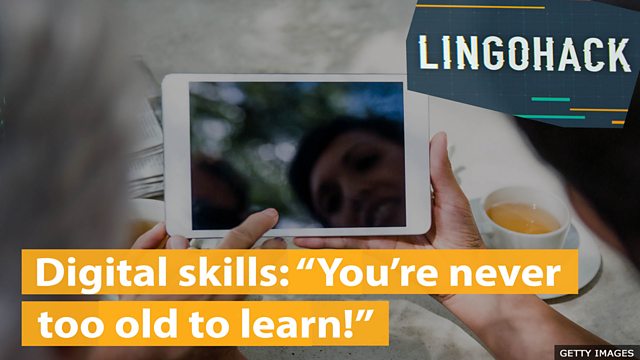 tablet – small piece of computing equipment with a touchscreen

video calling – contacting and talking to people over the internet

engagement – involvement (with something)

Ron and Jean were married for 56 years, but at the start of the pandemic Jean died of cancer.

Ron Dalton
Three weeks after we got the funeral over with, lockdown came - it couldn’t have come at a worse time.

Stuck shielding at home for months, Ron faced his grief alone until he decided to learn how to video chat.

Ron Dalton
To be quite honest, without my iPad I’d have been totally lost. In my particular position, it is brilliant because I can’t walk, so it’s been a godsend to be able to talk to people, you know, without going out of my house.

He was remotely taught digital skills by local charities in Leeds [in the north of England]. After never having touched a tablet device before last year, he’s now used his to find bereavement counselling and chat to people.

Ron Dalton
At least you’re not talking to faceless people - when you talk to them on the phone, you can’t imagine who you’re really talking to. I’ve got in touch with a cousin of mine in Kent [UK], who I haven’t spoke [spoken] to for 45 years, and I’ve got through to her on Messenger and all you do is press a camera thing and it gets you through. Unbelievable.

Laxmi Gopal, BBC reporter
And Ron’s experience reflects a trend among his generation. An Ofcom study [UK’s telecoms regulator], found the proportion of over-65s using video calling nearly tripled after lockdown, and the Leeds branch of Age UK says during the pandemic it has seen a doubling in demand for its digital support services among older people.

Of course, it is not about replacing face-to-face contact, but simply offering more options.

Lee Potter, Age UK, Leeds
It is about giving people that choice. We’re trying to give people the skills to… and the access to the devices and the connectivity which there are all challenges that we face, but if we can encourage people to give it a go so they can see what it’s like and to use it if they need to.

There’s work to be done to ensure wider access to the internet and devices for the older community but the past year of lockdown has at least encouraged more engagement. And the final thought from Ron on Zoom…

Ron Dalton
You’re never too old to learn – it’s as simple as that, if I could [can] learn, anybody can.

He got in touch with his cousin in Kent [UK].