What we've learned from the children of the 90s 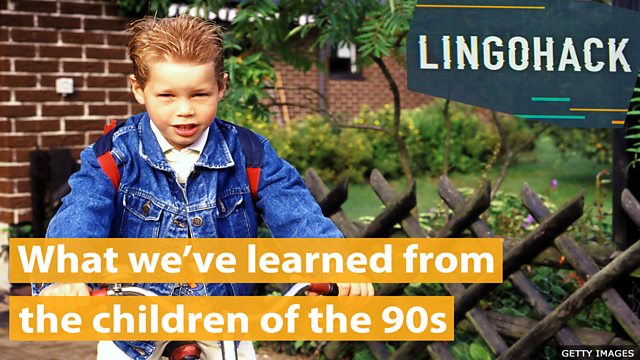 What we’ve learned from the children of the 90s

privileged – having an opportunity to do something special

meticulously – doing something with care; thoroughly

journals – magazines or books which focus on one subject

contributing – giving or adding to something

What can be reduced by putting babies to sleep on their backs?

We first met and filmed with Michele and her young family three decades ago.

She was the very first mum to sign her daughter Lindsay up to the study back in 1991.

Michele Goulden - Test subject
I didn't really hesitate. I'd always been interested in health. I was keen to make sure that the girls, you know, were brought up eating well and being in the right kind of environment.

And since then, almost everything Lindsay has done has been watched and recorded – feeding into the biggest study ever done into children's health.

Lindsay Pilgrim - Test subject
I just feel really privileged, to be honest, to be a part of it, and to be able to help generations to come.

The professor behind the entire project still carries out research. She's eighty-one.

Professor Jean Golding - Founder, Children of the 90s study
The amount of the information we've got is world beating. Nobody's got anything like it. And as a result, all sorts of different scientists can answer questions that can't be answered in any other way.

We now know eating oily fish is beneficial during pregnancy. There's a link between peanut allergies and skin lotion and putting babies to sleep on their backs reduces cot death. Over the years, everything's been meticulously studied and stored.

“What we have here is about twelve and a half thousand placentas.”

Thirty years ago, thousands of placentas were kept in buckets. Now, they're in freezers. It started with fourteen thousand pregnant women. Thirty years on, their children's children are still being followed.

Laura Pirret - Test subject
My placenta from when I was born and now the placentas from when the girls were born are being stored somewhere. It is amazing to think that all that genetic information, all that history of our family is on record somewhere.

Linda Cornish - Test subject
We’ll do samples of things like our blood and our spit, but we’ll also give away our teeth.

And the research keeps going.

Lindsay Pilgrim - Test subject
Now, I'm at uni [university] studying osteopathic medicine. I'm looking at these journals that have been influenced by children of the 90s studies, and that is… yeah, that's pretty cool, yeah.

It's gone full circle. Lindsay - the study’s very first baby - is now benefiting from the bank of life she spent her childhood contributing to.

What can be reduced by putting babies to sleep on their backs?

Putting babies to sleep on their backs reduces cot death.