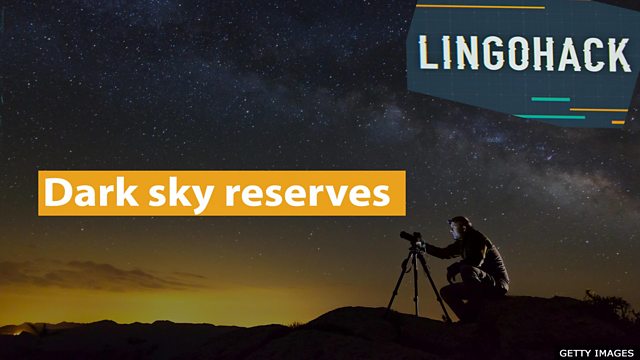 astronomy – scientific study of things that occur in space

How many dark sky reserves are there in the UK now?

Vibrant pictures of star-strewn darkness. Incredible images of our galaxy - the Milky Way - stretching across the night sky.

These photos have been taken from the Yorkshire Dales and the North York Moors [UK] – two national parks which have now been designated Dark Sky Reserves. The special status is given to areas around the globe with low levels of light pollution and good conditions for astronomy.

Richard Darn, Astronomer
About eight out of ten Yorkshire people cannot see the Milky Way from where they live, you come here, and it stretches [from] one horizon to the other, it’s fantastic - river of light in the sky. Northern Lights - we can see the Northern Lights from here, very, very difficult to see from other parts, more industrial parts of Yorkshire. So really it’s a sky full of magic both here and in the Dales.

More than 1,300 square miles [3,366 square kilometres] combined - the two parks form one of the biggest areas in Europe to be given the status. They join five other dark reserves in the UK, including in Snowdonia and Exmoor.

Julie Hutton, Yorkshire Dales National Park Authority
It’s amazing news that we’ve got the designation and what’s really important is that this gives the opportunity to businesses here to extend the season in tourism - we have dark sky festivals in February half term [school holiday]. Obviously the season’s often quieter in that time of the year, so this is a much needed opportunity to help boost the economy.

It's hoped the new status will help keep light pollution low, protect wildlife habitats, and attract visitors in winter months when the sky is darkest where, if you're lucky, you can see the expanse of night, beautifully illuminated - reminding us that our planet is one tiny part of a vast, star-scattered universe.

How many dark sky reserves are there in the UK now?

These two new reserves make a total of seven dark sky reserves in the UK.