The future of the office 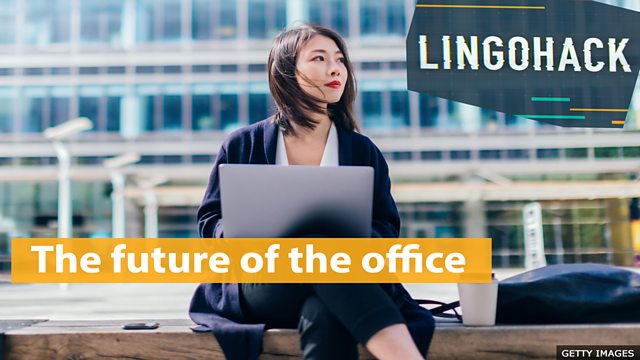 The future of the office

through the roof – raise to a very high level

According to Tushar Agarwal, what are companies and people demanding more of?

Remember this? This is what an office looks like. During the pandemic, millions of people swapped their large open-plan offices for their living rooms. Now, some companies say their employees need never come back in.

Brynn Harrington - Vice President of People Growth, Facebook
Facebook believes that remote working is the future. We think in the future we're going to increasingly take work to people versus need to bring people to work. We also want to be able to give our employees choice to live and build lives in places that they love - and we want to increase our ability to hire from places around the world, not just places where we currently have offices.

Nina Nanji - BBC Reporter
But isn't everyone fed up of working from home by now? Some people must be desperate to get back into the office.

Brynn Harrington - Vice President of People Growth, Facebook
It's really interesting! In our data we're seeing that some people are having an amazing experience while they’re working from home, and some people are really struggling. So, the big picture to takeaway is that this is a really, really personalised thing for people.

Facebook estimates that more than half of its staff could work remotely in the coming years, but it insists the move is not about saving costs. And it says it’s committed to keeping its offices - like this one - open.

Other tech giants such as Microsoft and Twitter have also indicated staff could stay remote - even after lockdowns ease. On Wall Street, they seem less enthusiastic about the idea. The boss of Goldman Sachs rejected working from home as a new normal - labelling it an 'aberration' instead. There are also fears it could create more inequality.

Professor Nick Bloom - Economist, Stanford University
The problem is, if you're working from home five days a week and most of the rest of the team is in the office, you're likely to lose out in terms of promotions and, you know, pay increases. And looking at the data, it's clear that we see a much higher share of particularly women with young kids, disabled people, people living very far from the office that look like they're going to choose to work from home for five days a week.

For many companies, the answer probably lies somewhere in the middle - with workers splitting their time between office and home.

Tushar Agarwal - Co-founder and CEO, Hubble
The office does have a future, we believe the future is hybrid. We believe the future is flexible. The demand for flexible workspace has just gone through the roof. Just in the month of March, we're back to about sixty to seventy percent of pre-Covid levels, and actually huge amounts of companies that are demanding flexible space used to be in traditional need space, so now people want more and more flexibility than ever before

One thing's clear - the world of work will look very different to how it did before this crisis.

According to Tushar Agarwal, what are companies and people demanding more of?