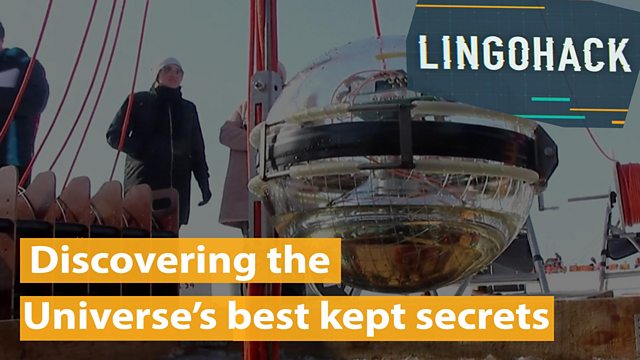 particles – very small pieces of something

detect – work out; find out

evolved – developed over a long period of time

Which Russian lake is this telescope being dropped into?

This is the world’s biggest underwater telescope – plunging into the world’s deepest waters to discover some of the tiniest particles known to man.

This massive space telescope is what it takes to detect the Universe’s best kept secrets – neutrinos – also nicknamed ‘ghost particles’.

Made of strings, glass and stainless steel, Russian scientists are plunging it more than 700 metres into Russia’s Lake Baikal.

Bair Shaiybonov, Senior Researcher, Joint Institute of Nuclear Research
Lake Baikal is perhaps the only lake where a neutrino telescope can be deployed due to its depth. We need the greatest possible depth, over a kilometre. Fresh water is also important for its transparency. And we also have an ice covering lasting two to two and a half months, which is very important for the deployment of the telescope.

So why go to all this effort? Neutrinos are subatomic particles, and while there are plenty in the Universe, they are very hard to detect.

Scientists are hoping that by capturing the elusive neutrinos, they’ll be able to better understand the Universe – finding out how it came to be and how it’s evolved to what we know today.

It seems some of the Universe’s biggest secrets are locked in a tiny package.

Which Russian lake is this telescope being dropped into?

Russian scientists are plunging the telescope more than 700 metres into Russia’s Lake Baikal.