Trains powered by the Sun 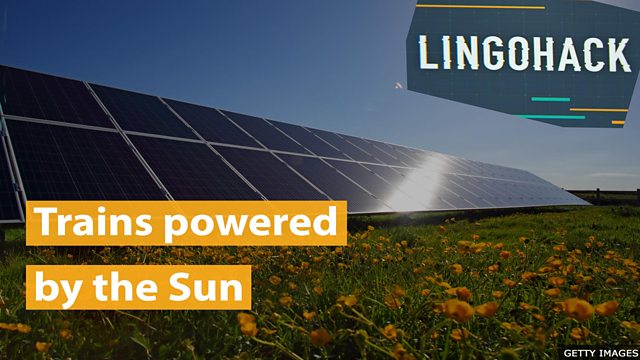 Trains powered by the Sun

a push – a determined effort

sources – places where things come from

Which country’s railway system plans to be carbon neutral by 2030?

Railways are one of the greenest forms of transport, but they still use huge amounts of electricity. So why not run trains on solar power?

These look like ordinary commuter trains, but near this station something unusual is happening.  They’re getting a little bit of power directly from this trackside solar farm.

Leo Murray, Riding Sunbeams
This is 123 solar panels, taking energy straight from the Sun, and feeding it directly into the rail traction system via the inverters you see on the wall over there. What this means is that, so long as the Sun is shining, every train that passes this section of track is picking up a little bit of the energy that it needs to move, directly from the Sun.

Many railways are replacing diesel trains with cleaner electric ones. But in the UK, rail is the biggest single consumer of electricity.  So there’s a push to get more from renewable sources.

Gareth Dennis, Rail Engineer and writer
The grid is decarbonising and the railway needs to exploit that. And so you are looking at wind as a good example of providing clean energy, nuclear is certainly a part of the mix as well. But also you’ve also got solar, which is continuing to get cheaper as a source of electricity. Solar energy is a really easy thing to deploy next to infrastructure on embankments, wherever you like.

And how about countries with even more Sun than the UK?

Nearly 1000 stations in India have solar panels on their rooves. And Indian Railways plan to be carbon neutral by 2030.

Australia already has a train run entirely on solar power. Its batteries are charged by panels on the train roof and at the station. It actually exports 75% of the energy it creates back to the grid. But this train only goes a short distance and battery storage is limited.

Gareth Dennis, Rail Engineer and writer
I don’t think we are going to see trains with lots of solar panels on the top of the roof whizzing around any time soon. However, in terms of solar panels either trackside or as part of the wider grid mix – I see that as being quite a major part of the electricity that will power trains in the future.

Which country’s railway system plans to be carbon neutral by 2030?