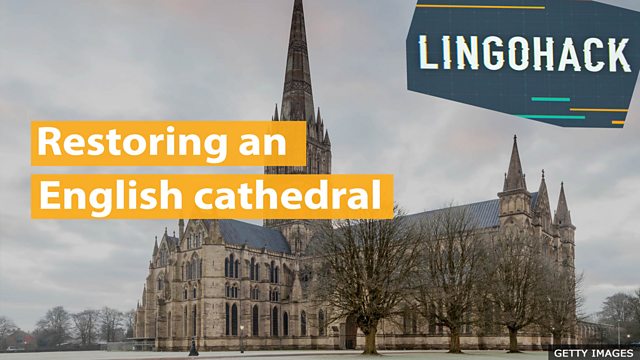 spire – pointed tower at the top of a building, such as a church

parapets – low walls around the edge of a roof

forebears – people from the past who you are related to

artisans – people who do skilled things, usually by hand

How much of the cathedral’s stonework has been restored in the last 35 years?

Its spire stretches 123 metres into the heavens – just above 400 feet - making it the tallest in Britain. It dominates the city of Salisbury and the surrounding countryside. But it's only up close that you gain a full appreciation of this building and the people who created it.

We're climbing the scaffolding on the Among the Parapets tour. Covid-secure of course, but a chance to see the scale of the task at hand.

John Maguire, BBC reporter
Well, this building is 800 years old. The restoration work that’s been going on for the past 35 years or so has seen the replacement of around one per cent of the stones. So, as you can imagine there's still quite a lot of work to do.

Clambering beneath the east end roof into a loft that for centuries was a workshop for the stonemasons, Gary shows me how much of the traditional way of working still continues today.

Wind, rain, frost and pollution have joined forces to attack the cathedral's exterior. But step inside, and the stonework looks as if it was created yesterday.

Back on terra firma in the stonemasons’ workshop, Sarah's carving in the same way as her forebears have for centuries. And like them, modern-day artisans create their own incredible detail in the stone. Often, their work will be placed hundreds of feet high, near invisible from the ground.

Traditionally, they've carved their unique signature, often initials, into the stone. It's known as a 'banker mark', as it ensured that they were paid.

The money raised from the tours will go towards the two million pound [$2.6m] shortfall caused by Covid. But, Salisbury Cathedral is among those institutions that have survived even worse.

How much of the cathedral’s stonework has been restored in the last 35 years?

Only one per cent of the cathedral’s stones have been restored in the last 35 years.