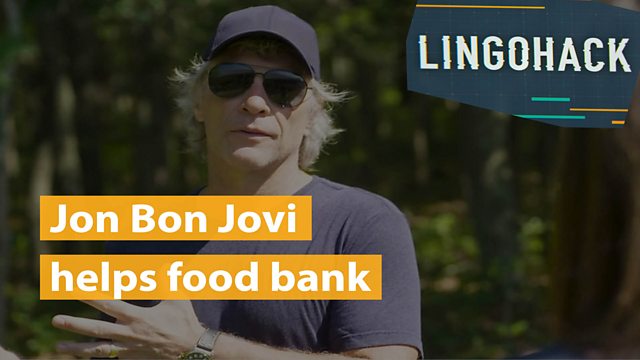 hands-on - involved with something by doing some of the work

stepped in – got involved to help

godsend – much needed but unexpected offer of help

It’s distribution day at this food bank. There are no volunteers here, just a handful of workers and staff - including Jon Bon Jovi.

The global pandemic means his other job as [an] international rock star is somewhat on hold so he can devote time and sweat to this project.

In less than an hour and a half, several hundred kilos of food are loaded onto trucks and taken to seven different food pantries across eastern Long Island - a process that has happened every week since March.

Jon Bon Jovi
We'd be remiss if we just wrote a cheque. We feel that being hands-on makes us feel good while we're doing good. And I'm a control freak!

This kind of work is not new for Jon and his wife, Dorothea. Together they run the JBJ Soul Foundation, doing philanthropic work like building homes and running community kitchens.

And it's not just the people running the food bank that is surprising - it's the location too. This area is known as a playground for the affluent - one of the wealthiest zip codes in America.

Usually, summer is when the Hamptons’ economy booms. The arrival of the rich seasonal residents means lots of work, but not this year. Local poverty has risen sharply and demand at the Springs Food Pantry is up 300 percent.

Holly Wheaton wasn't sure how she was going to feed her community. That is, until she got help from a rock star.

Holly Wheaton, Springs Food Pantry
I couldn't get food from the grocery stores, [because] the shelves were empty. I couldn't get them from the food banks. So, when Jon Bon Jovi stepped in with his food bank, it was a godsend.

The coronavirus pandemic has ripped open the deep economic divides in America for all to see – even right here, in the Hamptons.

Local poverty has risen and demand at the Springs Food Pantry is up 300 percent.