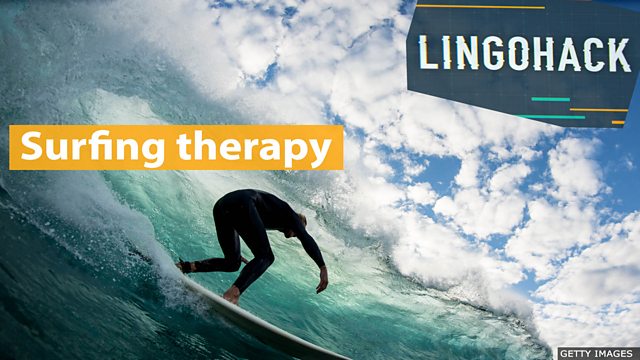 healing properties – qualities that help someone or something recover

ride out the storm – deal with a difficult situation

What is The Wave?

Believe it or not, ten years ago Charlotte Banfield had a phobia of water.

Charlotte Banfield, surfer
I used to be really scared to go to the beach, go near the shower, go in the rain. It was more of a sensory thing. The feel of water used to really scare me.

Charlotte has cerebral palsy, autism and anxiety. When her mum signed her up for a surf therapy session - part of the ‘Wave Project’ - it changed her life.

So, I still have bad days where I get really anxious and I feel like I can’t leave the house. When I’m having those days, I literally get my surfboard, get my wetsuit, get in the car and go, because I know that as soon as I get in the sea, I’ll feel better again. It’s like the sea has some magic healing properties. It just works instantly.

Charlotte’s recovery is such that last year she won the English Adaptive Surfing contest - and she has a master's degree in marine biology. Today, she’s at The Wave, the artificial surf lake near Bristol (UK), with its founder Nick Hounsfield.

He’s long been an advocate for what’s known as 'blue health' - the healing powers of water and the sea. For Nick, his belief became a reality six months ago.

Nick Hounsfield. Founder, The Wave
I suffered a massive stroke and it became part of my rehabilitation, being here, being in water, swimming alone and starting to realise that my… the connectivity with my brain and my health was a big part of rehabilitation and I really believe that that’s a massive part of how I’ve managed to recover my speech coming back so quickly.

Charlotte and Nick are prime examples of the benefits of surfing - highlighted in a report published by The Wave - it looks at how the sport can help physical and mental wellbeing, especially considering the impact of Covid-19.

Dr Easkey Britton from the National University of Ireland Galway, is a surfer and has studied what happens to the brain and the body when in the water.

Dr Easkey Britton, University of Ireland Galway
Being in, on or near water and certainly being actively engaged in it helps, kind of, both stimulate and soothe the nervous system. Our hormonal system, our respiratory system and even our heart rate… it slows in response to these environments.

From the blues to blue health - the power of waves are [is] helping people to ride out the storm.

What is The Wave?

The Wave is an artificial surf lake.