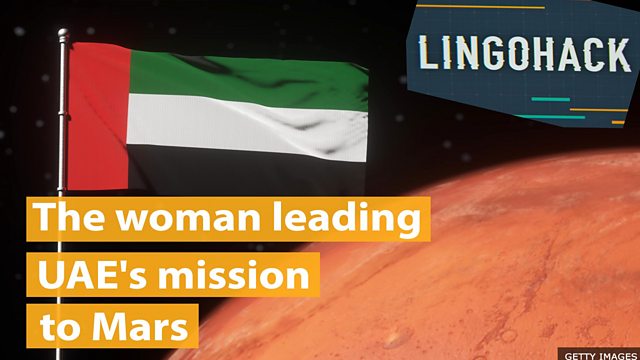 a big deal – something very important

What is the UAE’s new spacecraft called?

Sarah Al-Amiri is the scientist in charge of taking the United Arab Emirates to Mars.

Sarah Al-Amri, scientist
I was interested in space just by being mesmerised by the vast largeness of space and the complexity of understanding and learning about it.

So far, the UAE has only launched satellites into Earth’s orbit. Getting to Mars will be a huge leap. It’s also a big deal for the Arab world - it’s their first inter-planetary mission.

The country’s spacecraft is called Hope. It’s taken six years to build, with help from US scientists.

Sarah Al-Amri, scientist
We’ve tested and tested and tested this spacecraft to ensure that it can survive every single scenario, and now all of that rests on a launch pad on top of a rocket that’s destined to (go to ) a planet that’s millions of kilometres away from us.

The spacecraft will launch on a Japanese rocket and take seven months to reach Mars. Once it’s there, it will study the planet’s atmosphere.

Sarah Al-Amri, scientist
It is a weather satellite of Mars that it provides us comprehensive understanding of the weather throughout the times of the day, during [in] different regions and at [in] different seasons, and that gives us the comprehensive view that we require.

This could help to solve a major Martian mystery. The Red Planet was once covered in rivers and oceans like Earth. Studying its atmosphere could help to explain how it became the barren, dusty place it is today. But Sarah says it’s not just about the science.

Sarah Al-Amri, scientist
For children at school today, this mission has opened up new opportunities for all of us to work in designing and developing a planetary exploration mission. This is something that we couldn’t fathom could have been possible to work in the UAE.

If this mission does succeed, a new player in the global space race will have truly arrived.

What is the UAE’s new spacecraft called?

It is called Hope.