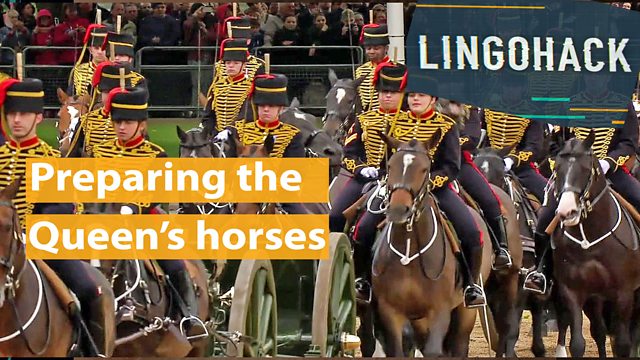 champing at the bit – desperate to start doing something

How many horses are there in the King's Troop Royal Horse Artillery?

Preparing to get back on parade. For the equine stars of Trooping the Colour, training is underway once again.

"When the horses come back from grass, it's like they've been sat on a beach for a few months, eating lots of pizza - generally a lot fatter."

Trooping the Colour is an important fixture in the regiment's calendar.

It's the epitome of precision, pomp and pageantry in front of huge crowds.

For the last few months, most of the King's troops 140 horses have been enjoying the quiet life in the Leicestershire countryside [in the UK].

The decision has now been taken to get them back to the barracks.

Units like the King's Troop Royal Horse Artillery exist to take the lead in big ceremonial and state occasions - all of which have been cancelled since March, due to coronavirus.

In normal times, Trooping the Colour would be one of the high points of the year.

Captain James Billingham, the King's Troop Royal Horse Artillery
We march past Her Majesty the Queen first out of all the mounted regiments, who is our Captain General, so it is a huge honour, the opportunity to present not only our own guns but also the guns of the entire Royal Regiment of Artillery to Her Majesty. It's a great privilege.

Here at the barracks, they are champing at the bit to get back out on parade.

With humans and horses ready to resume their official duties - as soon as it's deemed safe to do.

How many horses are there in the King's Troop Royal Horse Artillery?