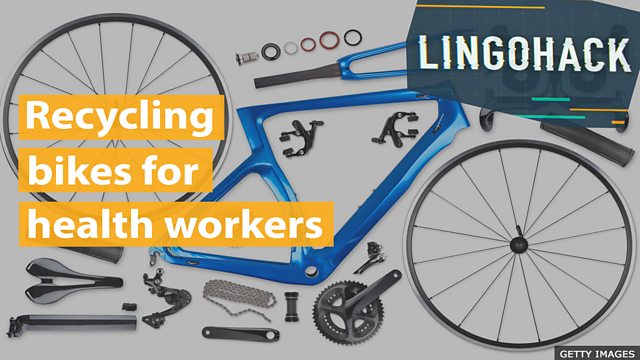 second-hand – not new /used before

refurbished –made to look new again

Laura works for the NHS (National Health Service) at the Royal Shrewsbury Hospital. (In the UK)

Laura Bird, NHS worker
I probably cycle to work if it's nice weather and I've got enough time and it's good for mental health for people. It means that I can get out and relax a little bit more. I think it's such a lovely thing they're doing - it’s such an amazing thing.

This charity was launched last year, with the ambition of increasing cycling in Shropshire. Since lockdown began they've been flooded with second-hand bikes - they've refurbished and given away 33.

Jon Kean, Shropshire Cycle Hub
Some of these NHS workers are finding it difficult to actually get to work, with trouble with public transport, so we're helping them. This fits us, it fits the NHS requirements and it helps combat this crisis.

Mick helps run a cycle club in Birmingham. In his back garden in his spare time he too has been breathing new life into old rides, helping those on the front line.

Mick Stanford, Cannon Hill Cycle Club
There was a couple last week, both worked - husband and wife - that worked at Solihull Hospital and it was just amazing to be able to give them a bike each, to take them up there and to see them riding off on it and then them now being able to cycle to work [instead of] getting the bus. It's a great feeling, it really is a great feeling.

In lockdown in places, more of us seem to be swapping four wheels for two. The campaign group funding this project and nine others in Birmingham and the Black Country is urging us to keep on peddling once lockdown is lifted.

Volunteers say these schemes will carry on for as long as they're needed.

It has given away 33 bikes so far.