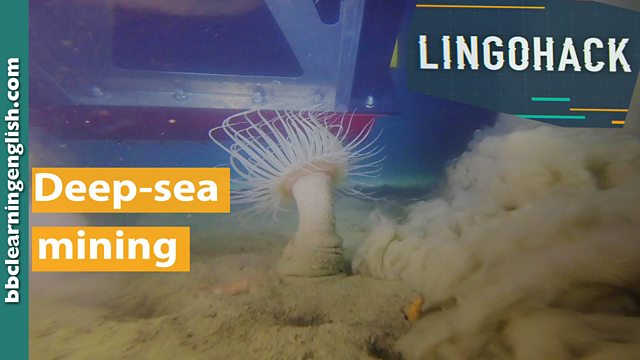 sources – places that things come from

rich in – containing large amounts of (something)

Which metal is needed for batteries that power electric cars?

In the waters off Malaga, an experiment with a strange looking machine – lowered underwater to test a new and controversial kind of mining – on the ocean floor.

A camera on the machine monitors its advance over the seabed. A soft coral stands in its path.

Mining would involve excavating rocks down here and no one knows the implications.

The project is run from this Spanish research ship – funded by the EU to find new sources of important metals.

What this project shows is how the technology is advancing in a way that makes deep-sea mining seem much more plausible, which confronts us with a very difficult question - is it the right thing to do given how little we know about the potential impact it could have on life on the ocean floor?

Operating underwater, mining the seabed has never been tried before. It would destroy whatever is directly in front of the machines and they’d create clouds of sand and silt which could smother marine plants and creatures even a long way away.

But there’s growing pressure for mining to start. Rocks like these – billions of them – are the target. Because, they’re amazingly rich in important metals, especially cobalt, which is needed for batteries. So the boom in electric cars means there’s growing demand for cobalt. And mining companies think the deep ocean could provide it. So if mining goes ahead, can the damage be limited?

Henko de Stigter, Chief scientist
We’re on the brink of a new time that we will go down to the deep sea and start changing the landscape of the deep sea and the deep-sea life. And then we have to consider, is it worth it? Do we want to do that in the same way as we did already with [the] land?

This is a trial device – the machines that will actually do mining will be about ten times bigger. Dozens of ventures are planning to open mines on the seabed. This is a glimpse of how they might look.

Which metal is needed for batteries that power electric cars?