The end for London’s oldest boats? 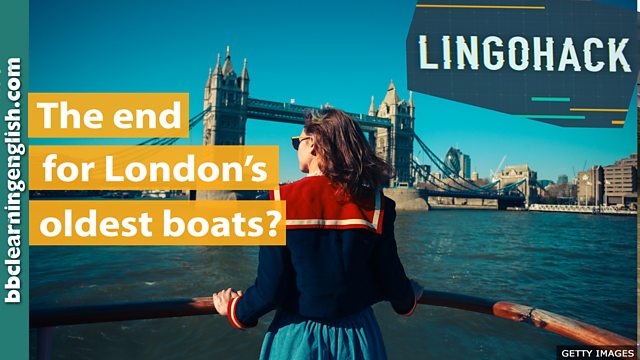 The end for London’s oldest boats?

tide – regular rising and falling of the sea level

skipper – captain of a boat (informal)

on course – following the planned route

What was the Connaught used for in the past?

Welcome aboard the passenger vessel Connaught - built a century ago and, like her sister ships, still plying her trade on the 24-mile route from central London to Hampton Court.

Tony Lodge, Thames Historian
Well, they are actually a unique design and they were built for the Thames. When the tide is out at low water, they can get under the bridges, which are quite low in this part of London. And they allow passengers still to have access to these historic roots, which actually, are as anyone who's been on them, are actually quite magnificent.

River steamers launched for a tourism boom during the reign of Queen Victoria also saw military service. The Connaught was called up as a hospital ship during World War Two.

The old river boats were designed to carry their passengers in comfort and some style. By the 1960s, the river was buzzing with traffic. But now modern safety standards are about to catch up with the last survivors from the original fleets.

Dan Adams is Connaught's skipper and tour guide. He says the safety review threatens his livelihood.

Dan Adams, Connaught's Skipper
It's not practical to do it and it would send the company out of business.

The report's authors say there's room for manoeuvre, but they have to stay on course.

The recommendations go before parliament later this year. The future of these river veterans hangs in the balance.

What was the Connaught used for in the past?

The Connaught was used as a hospital ship during World War Two.