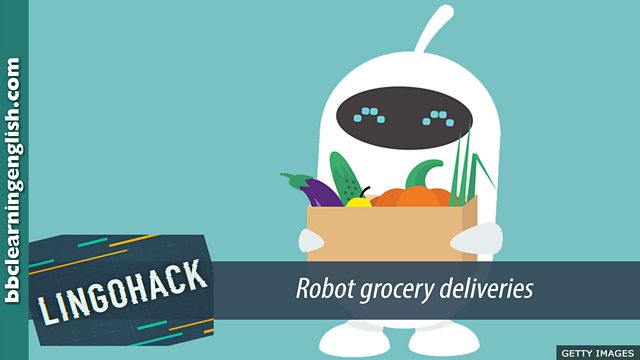 handed over – given to someone

the order is placed – the request for products/services is made

on its way – travelling to its destination

What happens if someone tries to open the robot to steal the goods?

Kayla's life is busy. When the dust settles, she craves convenience. But, like many in Milton Keynes, Kayla's groceries won't come by van, or be handed over by a human. Since last April, she's had the option of delivery by robot. Thirty-five robots are now making more than 1,000 deliveries per week.

Chris Conway, Co-op (voice)
Once the order is placed, a colleague will then pick the products and then they will place them in the robot.

With her address programmed in, Kayla's delivery is on its way. The robot is navigating itself and is programmed to stick to paths and pavements. And if it finds something blocking its way, in this case me, it should work out what to do.

Henry Harris-Burland, Starship Technologies
The robot has like a detection bubble around it and whether it's a pedestrian, a dog, any form of obstacle, it will either safely stop, it will manoeuvre around the obstacle. But if it's a very narrow pavement, it can even back up and get out the way.

The robots can only be opened by the customer who placed the order. An alarm will go off if they're tampered with. The scheme's being expanded to more than 10,000 homes and some university campuses.

Kind of cute, or kind of creepy? In Milton Keynes, robots are changing the way people shop.

Did you get it?
What happens if someone tries to open the robot to steal the goods?

If someone tries to tamper with the robot, an alarm will go off.