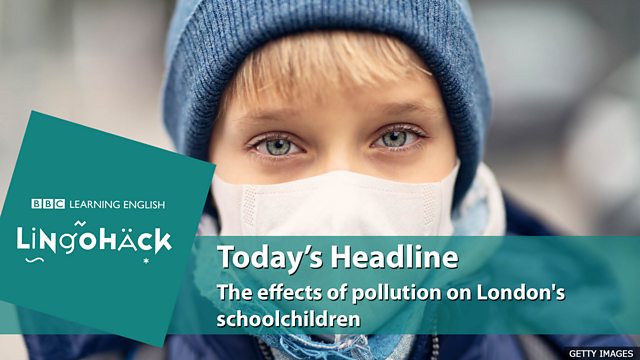 exposure – (here) being put in a situation that might be harmful

low emission – giving out only small amounts of pollution

According to the study, what percentage reduction in schoolchildren's lung capacity did air pollution cause?

For teacher Ben Macdonald, air pollution has long been a concern for both him and pupils at the Addey and Stanhope school in Deptford (London). It sits on a busy road.

Teacher, Ben Macdonald
We do have a lot of students here at Addey and Stanhope who do have asthma and obviously this has an impact in terms of their long-term health, but also their ability to participate in sporting activities.

Schoolchild 1
I'll literally not be able to breathe.

Schoolchild 2
You can feel how the air, like how it affects your lungs.

A study which looked at 28 primary schools in London has now revealed that children living in boroughs with high diesel pollution suffer from stunted lung capacity.

Dr Ian Mudway, King's College London
It's not that there is an effect those children will feel now. It's that this is indicative of the lungs not growing optimally, which means they won't actually attain maximum lung development later in life.

The research looked at 2,000 London schoolchildren over five years and found that exposure to dangerous particles was linked to around a five percent reduction in lung capacity.

Today Sadiq Khan (Mayor of London) was in New Cross to launch one of five new Low Emission Bus Zones - an attempt to tackle air quality on the most polluted roads with what are being described as the cleanest buses available. They'll add to the two existing zones already launched last year.

With seven low emission bus zones now launched, the plan is to introduce another five, and by 2020 the aim is for all buses in London to be as clean as possible.

Did you get it?
According to the study, what percentage reduction in schoolchildren's lung capacity did air pollution cause?

The study found that exposure to dangerous particles was linked to around a five percent reduction in schoolchildren's lung capacity.

Did you know?
More than 5.5 million people worldwide are dying prematurely every year as a result of air pollution. (Source: Global Burden of Disease project/IHME)