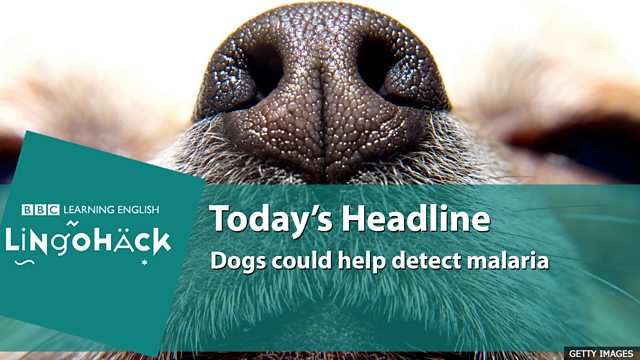 four-legged friends – informal and endearing way to refer to dogs

They're our four-legged friends, but could they help fight one of our worst enemies? Malaria infects more than two hundred million people every year. But now dogs are on the scent.

Socks from children in the Gambia were sent to the Medical Detection Dogs charity here in Milton Keynes. It’s taken training, but these pooches get it right 70% of the time if the children have malaria. But if the children were disease free, the dogs got it wrong 10% of the time.

It's still early stages but the study shows dogs have potential.

Chelci Squires, London School of Hygiene and Tropical Medicine
The most important thing with this is that it is much faster than current, existing, rapid diagnostic tests which can take up to 20 minutes and actually require a fully trained professional to do. Whereas this - if we had the Medical Detection Dogs going round a community, it will allow the whole community to be surveyed in a very short space of time.

The hope is dogs could work at airports to sniff out passengers with malaria to stop the disease spreading. But there's still a long way to go before dogs can join the fight.

The researchers will need to improve the dogs’ accuracy, test them on people rather than socks and investigate whether the animals can sniff out different strains of malaria.

The dogs are able to detect the malaria 70% of the time.

Did you know?
A dog's sense of smell is estimated to be ten thousand to one hundred thousand times as good as ours. While we have only six million smell receptors in our noses, dogs have up to three hundred million.