The AI that spots eye disease 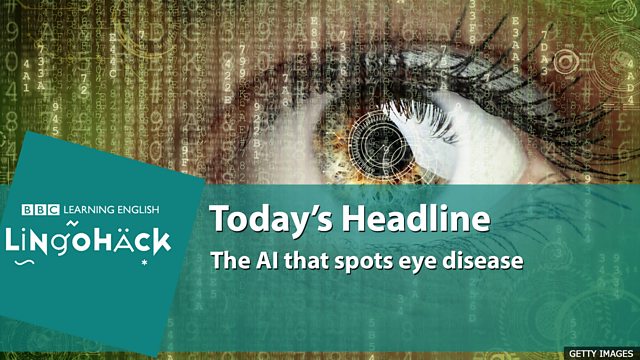 The AI that spots eye disease

gasp – breathe in quickly, especially because of surprise, shock or pain

the advent of – the arrival or introduction of something important

How many eye conditions did the computer detect?

On the brink of going blind, Elaine’s sight was saved by doctors at Moorfields Hospital. This scan showed she needed urgent treatment.

Now artificial intelligence - machines - have learnt how to interpret these complex images. A computer analysed a thousand patients’ scans using a set of rules - an algorithm - and was able to detect over 50 eye conditions. And did not miss a single urgent case.

Dr Pearse Keane, Consultant Ophthalmologist, Moorfields Eye Hospital
This is a jaw-dropping result - and I think that it will make most eye specialists gasp. Because, you know, we have shown that this algorithm is as good as some of the world's leading experts in interpreting these scans.

Using artificial intelligence to diagnose eye disease could be a game changer. That's because at present, doctors are swamped by the number of scans they have to read. And some patients go blind before they get treated.

200 people a day in the UK - like Elaine - develop the blinding form of age-related macular degeneration.

She only has vision in her right eye - and welcomes the advent of artificial intelligence in healthcare.

The eye research results, published in the journal Nature Medicine, are so promising that artificial intelligence looks likely to play a key role in the NHS within just a few years.

How many eye conditions did the computer detect?

The computer analysed a thousand patients' scans and was able to detect over 50 eye conditions.

American computer scientist John McCarthy (1927-2011) is considered one of the fathers of the discipline of artificial intelligence. He even coined the term in the 1950s.