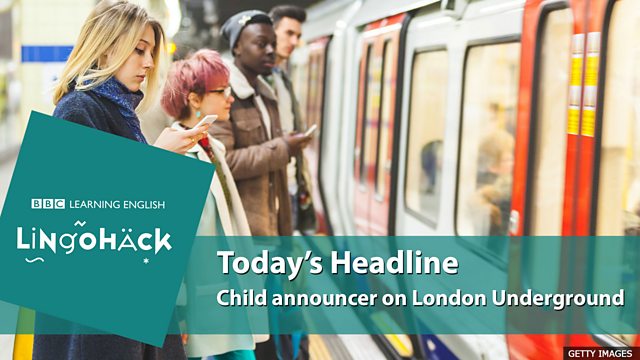 safety – the condition of being protected from danger

take care – be cautious of danger

handrail – fixed bar for people to hold for support

How are deeper adult voices perceived?

Around a quarter of a million people use Victoria Station in London each weekday. And for the past few months, they've been hearing an unusual voice. Meet the station's newest and youngest safety announcer – nine-year-old Megan. Her proud parents both work at the station.

Megan, safety announcer
Hello, everybody and please listen up. Take care on the escalators. Hold on to the handrail and your luggage.

Megan's recorded announcement is designed to tackle a serious problem. Around 10 people a day get injured on the underground network.

Mark Evers, Chief Customer Officer
What we have noticed is that when people do injure themselves, it's typically because they're not taking enough care when using stairs and escalators.

At Victoria alone on average, 15 people a month are injured this way. For some passengers at least, Megan's message seems to be getting through.

Passenger
I think everyone takes notice when a child says something. And because they don’t… they always mean it!

So what does someone who studies the psychology of the human voice make of this?

Dr Valentina Cartei, Voice Lab, University of Sussex
Research shows that deeper adult voices are perceived by humans as having more authority than higher voices. So a child’s voice wouldn't have that authority. But perhaps it's the shock factor of using a child's voice.

It may be just a short-term result from this shock factor. But the station says injuries have dropped by nearly two thirds since Megan's announcements started.

Did you get it?
How are deeper adult voices perceived?

According to Dr Cartei, research shows that deeper adult voices are perceived by humans as having more authority than higher voices.

Did you know?
The world's first underground railway was opened between Paddington and Farringdon Street in London in 1863 by the Metropolitan Railway.