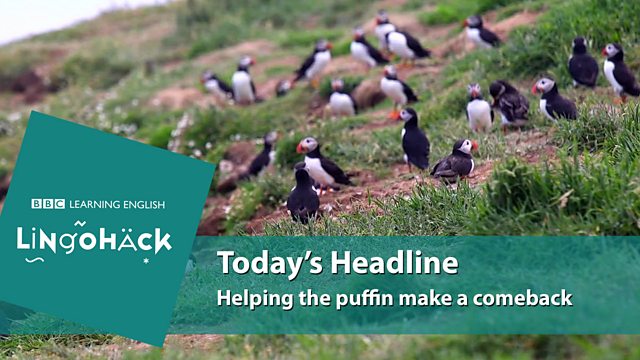 Helping the puffin make a comeback

identify – recognise something as proof that it happens

monitored – watched to find out what is happening

carry out – do; undertake

A thriving puffin population. Skomer Island is renowned for its wide range of seabirds. But the number of puffins breeding here is attracting international interest. They've been in decline in other parts of the UK and Europe for decades. So much so that the species is now endangered. Here scientists have found it's a different picture.

Dr Matt Wood, University of Gloucestershire
The population on Skomer has almost quadrupled in the last 30 years or so. That's great news for puffins in Wales and we're hoping to find out more about why those population changes are taking place, so that we can understand what might happen further into the future and maybe to help puffins more widely.

And to do that, researchers are exploring their feeding patterns.

Annette Fayet, Oxford University
It's really new. No one's ever tracked the movements of puffins before in these places where I'm gonna go.

This tracking device is small enough to fix onto a puffin’s back. And already the team has found that these tiny seabirds travel more than 90 miles (145km) a day to bring food back to the nest.

Annette Fayet, Oxford University
We're not only looking at where they’re going, but with complex analytical technique we can also identify their behaviour. So we can say, OK, in this place they're feeding, in this place they're resting or flying, and so the feeding places are really the key ones here that we're interested in.

The team will carry out the same work in Norway and Iceland, where there are concerns about the poor survival rates of chicks and where the number of puffins is in serious decline.

There are no such concerns on Skomer, where the chicks are being monitored daily, and a record of their weight is kept. But the work being carried out here could have a huge impact in helping scientists understand the threat these seabirds face.

Researchers found puffins travel more than 90 miles (145km) a day to bring food back to the nest.

Did you know?
Experts say the puffin population on Skomer has almost quadrupled in the last 30 years or so. This means the population is now four times bigger.