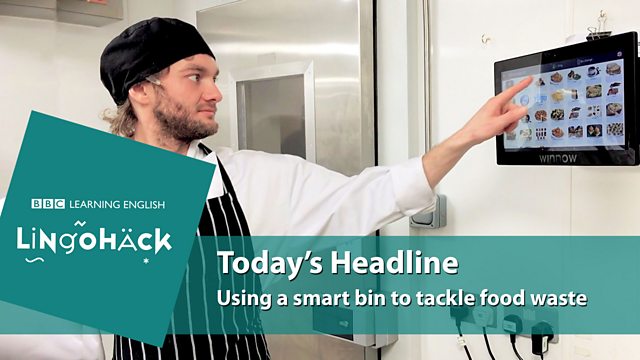 accurate record – stored information which is correct and without error

adjust – make small changes in something, often to correct it

What advantages are there to keeping tabs on what is being thrown out?

This commercial kitchen in central London prepares one-and-a-half thousand meals a day. It provides catering for a museum and a conference centre.

Kitchens like these typically throw away 20% of the ingredients they buy. Some are thrown away as trimmings even though they are edible. And sometimes food ends up in the bin simply because it's not needed after all.

To stop this happening, this kitchen has been using a new piece of technology which can simply be connected to a normal bin on scales. This is what's known as a smart bin. Kitchen staff use it like a supermarket self-checkout. The idea is to keep an accurate digital record of the food being thrown out. This helps the head chef make more informed choices.

Bill Owen, head chef
It was a shocker how many tonnage is actually saved through using this.

By keeping tabs on exactly what kind of food is being thrown out, the chef can adjust his orders of ingredients, but also improvise whole new menus based on what was previously being thrown away.

Mark Zornes, Winnow smart bins
In an operation where you make a significant amount of your food in advance, you can typically cut food waste in half.

Do people actually have time on top of everything else to catalogue the stuff as they are putting it into the bin?

Bill Owen, head chef
They do. To start with, take a little while to get used to the bin system. It is just about  familiarising yourself with where the buttons are.

However effective they may be there is one important factor that holds these smart bins back.

Andrew Stephen, CEO, Sustainable Restaurant Association
Traditionally, smart bin technology has been at quite a high price point for particularly small operators. There is only a relatively small fraction that can afford that upfront implementation.

It seems that smart bins are just one part of the solution to the pressing problem of food waste.

Every year 1.3 billion tonnes of food is wasted or lost globally. One quarter of this, or 325 million tonnes, would be enough to feed 870 million people anually.