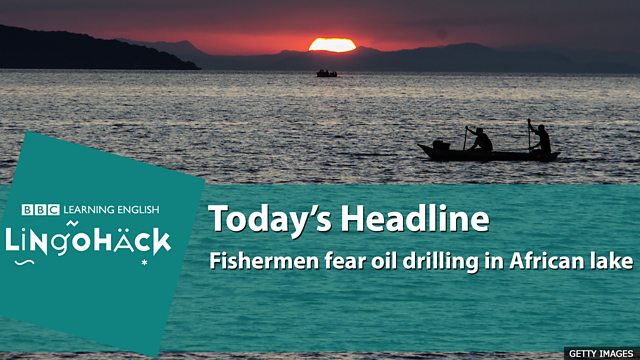 lifeblood – most important thing for something to exist

way of life – manner in which people live

in the doldrums – in a state of economic stagnation

What threatens the fishermen's way of life apart from oil drilling?

Fishermen braving the choppy waters of this vast inland sea in search of their daily bounty.

For countless generations, Lake Malawi has been their lifeblood - providing sustenance and a means to make a living.

But fishing communities like this are under threat along the lake shore as overfishing and climate change takes its toll. And now they are facing a new challenge - oil.

The largely dormant dispute resurfaced in 2011, when Malawi awarded a British company, Surestream Petroleum, a licence to drill for oil and gas in the contested territory.

Cassius Chiwambo
Head of Oil and Gas, Ministry of Natural Resources, Energy and Mining
I know governments of Malawi and Tanzania are actually engaging each other in order to make sure that the impasse is actually closed.

Local fishermen fear the worst. They are worried that oil exploration will pollute the lake, kill the fish and their way of life.

Malawi is one of the poorest countries in the world. The government is keen to capitalise on oil. But a local think tank doesn’t seem to harbour much optimism in the current state of the economy.

Dalitso Kubalasa
Executive Director, Malawi Economic Justice Network
We’ve been in the doldrums, I think, for some time. We seem kind of stuck. So we are locked in these political cycles.

The next generation’s fate hinges on the decisions taken by politicians today. So, the concern remains that fishing villages like these may not survive once the oil drilling begins.

What threatens the fishermen's way of life apart from oil drilling?

Malawi, Tanzania and Mozambique all claim parts of Lake Malawi, which is the third largest in Africa and among the 10 largest lakes in the world.