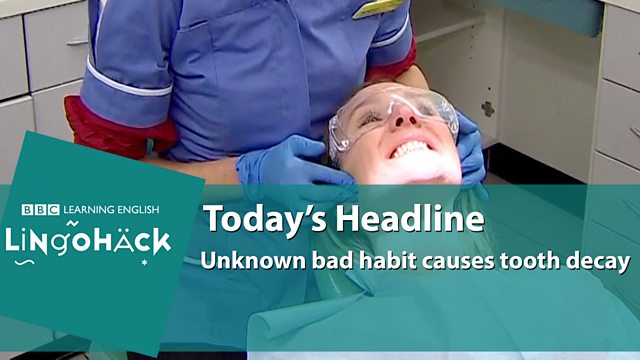 eats away – gradually damages or destroys

chip – break off a small piece

erode – gradually damage or reduce the strength of something

What does Rachel do that causes damage to her teeth?

Back in the dentist's chair, even though she thought she looked after her teeth well. Rachel Coe-O'Brien has erosive tooth wear. It's when acid eats away at them until they chip or get shorter. It turns out Rachel had a bad habit she didn't even know about.

When I drink normally, especially if it's a kind of flavoured drink, I would just hold it in my mouth for a bit longer than I suppose the average person. I think it might be the taste or something like that. And I think, again, that kind of… more exposure to my teeth and it sits in my mouth longer than just swallowing it down.

As vices go, it doesn't sound so terrible. But researchers say it's bad news for your teeth.

We found that about maybe one in six people had habits like sipping things really slowly or swishing them round their mouth - people tend to rinse things round their mouth. If you're doing these behaviours on a daily basis for years and years and years, you can cause serious damage to your teeth. And that serious damage can mean that your whole mouth needs to be rebuilt.

It is preventable - mostly by cutting back on acidic food and drinks. Some things though, like fruit - are generally seen as the healthy option. But from the dental point of view, they can erode teeth.

So should people scrap their five-a-day to protect their teeth? The researchers say that's the last thing they want. But the advice is to be aware of overall eating patterns, and to consider snacks that are less acidic and higher in calcium.

What does Rachel do that causes damage to her teeth?

Rachel holds the drink in her mouth longer than the average person, which exposes her teeth to the liquid for more time.

Humans have two sets of teeth. The first set of 20, which are informally referred to as ‘milk teeth’, are lost in childhood. The adult set has 32 and consists of four incisors, two canines, four premolars and six molars in each jaw.