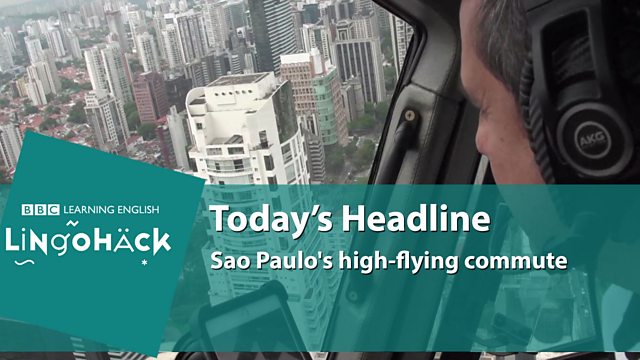 giving it a shot – trying (something)

a viable alternative – a possible solution that might work

pie in the sky – an idea that will never work

How many buses does Jacqueline have to take to get to work?

These are usually the preserve of the mega-rich. But Sao Paulo's newest cab service wants to shake up the city's skies.

Richard Cameron's giving it a shot – he's only going a few kilometres from the domestic airport to his office but it's a journey that on bad days could take over an hour. Order the chopper on your mobile app and then head to your nearest helipad - easy!

"It just saves a lot of time and you can spend more time either at home with your family or in the office in productive meetings. So, you know, that's extremely valuable."

The aim is to make helicopters a viable alternative to road transport. For just over 100 dollars, you could fly to the international airport - twice the price of a regular taxi, but as little as a tenth of the journey time. For those with the money, it's tempting - but they're still the minority.

Jacqueline spends as much as six hours a day commuting across the city – first a bus, then a metro and then another bus – the same on the way home.

"It would be marvellous, no? In five minutes, I'd be here. I wouldn't have to wake up so early. I'd have far more time to do lots more things. People joke that the thing that tires out people the most is the commuting, not the actual job."

For most of this deeply unequal city of 19 million people, travelling to work on a helicopter is still pie in the sky.

How many buses does Jacqueline have to take to get to work?

She has to take two buses to get to work.