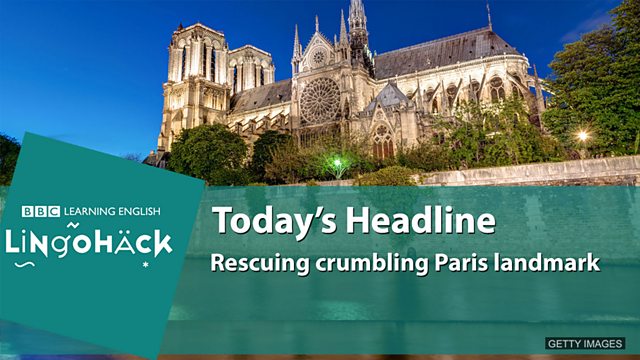 flying buttress – arch built against a wall to support its weight

brace – something used to join things together

What is causing the masonry to crumble away?

Outside on the roof above the back of the cathedral, this is the part of Notre Dame that visitors don't get to see. Fallen chunks of stoneware, gargoyles replaced by PVC pipes, a flying buttress held together by metal staples, a pinnacle in a brace.

Slowly this jewel of Gothic architecture is becoming unstable.

This section over here is what they call 'the cemetery'. These pieces are all bits of Gothic masonry which are in such bad repair, that they simply fell off.

The problem is pollution, combined with the cold and rain, which together are eating into the limestone. Eventually it crumbles away.

The only solution is to replace the masonry block by block. But that is a massive job and the French state can't afford it.

That's why the cathedral has launched an international plea for private funds, aimed principally at the U.S. On this very roof after all once cavorted the hunchback of Disney fame - oh yes, and the book.

Time, the elements and the petrol engine have exacted a heavy toll on Notre Dame Cathedral.

Today the imaginative genius of its medieval craftsmen is being eroded into annihilation. Without urgent help, much more will be lost.

What is causing the masonry to crumble away?

Pollution, combined with the cold and rain, are eating into the limestone, making it crumble.

The first stone of Notre Dame was laid in 1163 and it took 180 years to complete. Today the cathedral stands as a Gothic masterpiece.