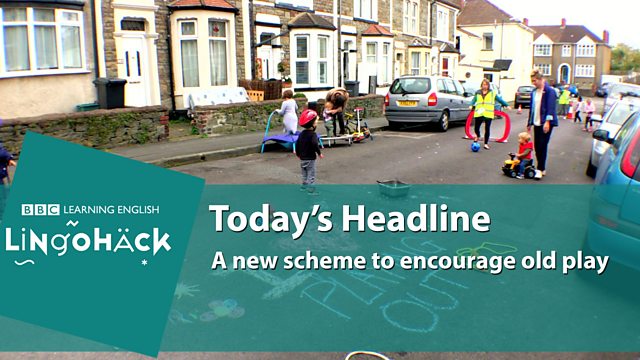 pilot scheme – first plan or program of its kind

draw inspiration (from)– find the source of an idea in something

government guidelines – advice from the government on how to do something

champion – (verb) support, defend or fight for something

A street in Toronto, Canada, with children doing what they do best - playing together and having fun. They're able to play on the roads here because cars are banished every week for four hours at a time. This street is one of seven that have just finished a six-month pilot scheme.

Deborah Doncaster, President - Earth Day Canada
''It's all about getting kids outside playing again. It was a natural part of my childhood but it's a big piece of childhood that's missing from the modern day."

Often known as 'Street Play' - it's an idea that's gaining traction around the world. This Canadian scheme drew its inspiration from the streets of the UK - streets like this one in Bristol. This street plays together like this for two hours every Tuesday.

Scientists who have studied the scheme think it can also have health benefits for children.

Professor Angie Page, University of Bristol
''You can get an extra ten minutes of moderate-to-vigorous physical activity just from simple closure of a street for a short period of time, which can make a real difference on whether they meet the government guidelines for physical activity.''

Who introduced Street Play sessions to her Bristol street?

Alice Ferguson, Director - Playing Out
''Our children were not getting outside enough, they were not physically active enough, and we saw that we had this great space immediately outside their front doors, but they couldn't use it. ''

More than forty local authorities across the UK are now supporting the 'Street Play' scheme she championed, and 'Street Play' seems to have an appeal that crosses national boundaries.

'Street Play' is a grassroots movement. This means that it is an idea which was first created and organised by ordinary people to solve a problem they were having at a local level.