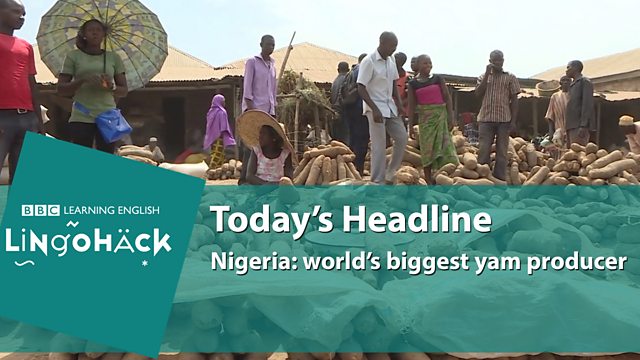 exporting – sending goods to another country to sell

generate – cause something to exist

diversify – attempt to include different types of things

funding – money given by an organisation for an activity

mainstay – the thing which is most important and most depended on

In June, Nigeria started exporting yam to Europe and the United States, as part of its move to curb its addiction to oil.

The government believes that yam exports will generate some six billion dollars every year, and create thousands of new jobs, helping diversify the economy.

But things are not that simple. Though Nigeria is the biggest yam producer in the world, an estimated 30 percent of the production rots away. The country lacks good storage facilities, the transportation system is very poor, and local traders and exporters are struggling.

Prince Vincent Yandev, Yam Exporter:
“I’d be able to export, like, 76 tonnes of yams to the US. The major challenges have been the funding so if the government can encourage banks to assist us, I think it would be better for us.”

Just over 200 metric tonnes of yam have been exported to Europe and America since the scheme was launched in June. The government wants yam and other agricultural products to replace oil as the mainstay of the economy. But there are also concerns that massive export of yams, would lead to higher prices, hitting the poor.

While the Nigerian government says exporting the country's yam to Europe and America is a big economic opportunity, many observers say the country has a long way to go in achieving the objective.

A lack of good storage facilities and a poor transportation system mean that 30% of the yam production rots away.

Yams are so important that many west African countries have a yam festival. The Iwa ji festival, literally means ‘the new yam festival’. Last year’s yams are discarded because the new year must begin with fresh ones.